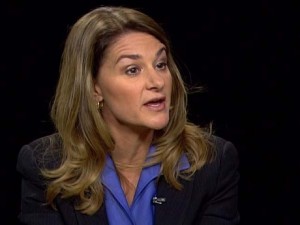 So Why is the Wife of Microsoft Founder Raising Billions to Inject Them with Depo-Provera?

Surely, Mrs. Gates would not have chosen this course if she knew the serious risks of Depo-Provera and if anyone—her Catholic parents, her Catholic high school teachers at the Ursuline Academy in Dallas or her parish priests (she attends Mass near her Medina, Washington home)—had taken the time to explain Humanae Vitae to her. This is, of course, the prophetic 1968 encyclical by Pope Paul VI that reaffirms the timeless teaching of the Church on the sanctity of human life, and rejects artificial methods of controlling births.

Or perhaps, like many modern-day Catholics, she has simply rejected it.

say this because Melinda Gates is the driving force behind a multi-billion dollar population control campaign primarily based on pushing Depo-Provera on women of color. Her partners include the major players in the business of reducing human fertility, groups like Pfizer, the International Planned Parenthood Federation (IPPF), USAID, and the UN Population Fund.

The campaign kicked off with the London Family Planning Summit held in July 2012. Gates herself pledged a cool $560 million, then collected over $2 billion more in additional pledges from various countries (like the U.S.) and organizations (like IPPF). Those delegates present pledged to contracept an additional 120 million women across the globe by 2020.

It is easy to understand why Pfizer is involved. As the manufacturer of Depo-Provera, the pharmaceutical giant stands to make tens of millions in profits as the campaign contracts to buy virtually its entire production over the next few years.

In fact, the Pfizer Country Director for Nigeria, Enrico Liggeri, announced at the Summit that the company is expanding the capacity for making Depo-Provera, the 3-month injectable contraceptive, by 50%. “One billion doses of Depo-Provera have been produced so far, and we are committed to making another one billion doses by 2020,” he said.

Nothing like having a government-subsidized market for one’s products.

No mention was made of the fact that steroidal contraceptives like Depo-Provera compromise a woman’s immune system and make her more likely to contract HIV/AIDS and other sexually transmitted diseases—which, by the way, are already running at epidemic proportions among many African populations.

As for IPPF, USAID, and the UN Population Fund, their involvement needs no explanation. They have all been in the population control business for decades. In fact, the UNFPA and IPPF owe their very existence to post-WWII “overpopulation” scare. USAID joined the scam later, but has done its best to make up for lost time, especially under Obama.

But why is Melinda Gates, who makes no secret of her Catholicism, involved?

Well, here she is in her own words.

In launching the London Summit, she declared it to be “an important milestone in the history of family planning. We are bringing far more resources to this effort than ever before. … We are putting women at the very center of this issue.”

She went on to say that the universal desire of mothers to give their children “every good thing” can only be fulfilled when access to contraceptives is universal, “and that’s why we’re all here.” She made no mention of Natural Family Planning, or abstinence, or any of the other teachings of her own Church.

Instead, she said, “I’m a Catholic, but women need access to contraceptives.”

I have tried to meet with Melinda over the years to talk about these issues. I have wanted to tell her that women in Africa and Asia are being injected with Depo-Provera without informed consent. That information about its life-threatening side effects is being withheld from them. That African women are dying as a result.

I have wanted to tell her that, according to the FDA, the women that she is trying to help “may lose significant bone mineral density,” may suffer “serious thrombotic events (blood clots),” “cardiac arrest and stroke,” “breast cancer,” “ectopic pregnancy,” “depression, irritability, and mood swings,” “bleeding irregularities,” “excessive weight gain”… The list goes on and on and on..

I have wanted to tell her that the women themselves want clean drinking water and help with the tropical diseases that are killing their children—not contraceptives.

I have wanted to tell her that Depo-Provera, like all powerful, steroid-based artificial hormones, is an abortifacient, so that she is not merely with her megabucks preventing souls from coming into existence, but is sending them prematurely back to the Father.

I have wanted to tell her that Natural Family Planning works brilliantly, how it is an all-natural method with no side effects, and how it is being practiced by an increasing number of African women. “One-quarter of all the women of childbearing age in the country of Burkina Faso use NFP, Melinda,” I imagine myself telling her.

I have (sigh) come close.

Through a priest friend, whom I will call Father B, I even managed to reach out to her parish priest, hoping that he would introduce me to his most famous parishioner. But he refused to perform the introduction when he learned what I wanted to talk to Melinda Gates about: Humanae Vitae and the dangers of hormonal contraception.

“I don’t agree with you or Mr. Mosher on the question of birth control.”

Of course, his real problem—which is shared by his parishioner, Melinda Gates—was not with Father B or me. Their dispute is with the One, Holy, and Catholic Church, which has rightly declared that artificial contraception and sterilization are immoral.

Which is clearly a much graver issue than merely disagreeing with me.