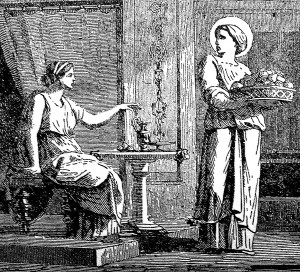 ST. SERAPHIA was born at Antioch, of Christian parents, who, flying from the persecutions of Adrian, went to Italy and settled there. Her parents dying, Seraphia was sought in marriage by many, but having resolved to consecrate herself to God alone, she sold all her possessions and distributed the proceeds to the poor; finally she sold herself into a voluntary slavery, and entered the services of a Roman lady named Sabina.

The piety of Seraphia, her love of work, and her charity soon gained the heart of her mistress, who was not long in becoming a Christian. Having been denounced as a follower of Christ, Seraphia was condemned to death. She was at first placed on a burning pile, but remained uninjured by the flames. Almost despairing of being able to inflict death upon her, the prefect Berillus ordered her to be beheaded, and she thus received the crown which she so richly merited.

Her mistress gathered her remains, and interred them with every mark of respect. Sabina, meeting with a martyr’s death, a year after, was laid in the same tomb with her faithful servant. As early as the fifth century there was a church at Rome placed under their invocation.

Reflection.—Christian courage bears relation to our faith. “If we continue in the faith, grounded, and settled, and immovable,” all things will be found possible to us.