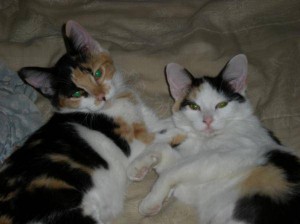 A few days ago, a dear friend and fellow pro-life warrior Ione Whitlock, author of the Belbury Review blog, sent me this e-mail:

I took my cat to the vet for a checkup. While I waited to be seen, I noticed an elderly couple apparently also waiting. We struck up a conversation. The woman was telling me about having her cat put to sleep a few years ago. “It was so lovely; they put a flower on the pillow. They gave the cat a shot that relaxed him, and he just drifted off to sleep. Then they gave him another shot that actually killed him. It made me a big supporter of Dr. Kevorkian. I hope when I’m ready to go that they do that for me.”

I smiled and said, “Well, I don’t think I would ever ask them to do that for me, but if they do it, I sure hope I don’t have second thoughts, because it would be terrible to be thinking ‘No! Wait! I’ve changed my mind. Give me another day,’ as they are jabbing the needle in.”

The woman’s smile faded. I added to the negative karma: “I’ve known too many people who have been really, really sick with pneumonia and have said in exhaustion, ‘Just let me go,’ only to wake up the next morning with an entirely new outlook. I hope when ‘they’ do whatever for me, they know exactly what I mean, because sometimes when I’m sick even I don’t know what I mean.”

With that, the husband woke up. Smiling broadly, he said, “Yes, sometimes when you’re really sick, you can get pretty confused.”

I added, “You know, that second shot—what it does is paralyze all of your muscles—your heart, your lungs. But the brain keeps going for several minutes. I can’t imagine the nightmare that would be—knowing you are dying, not being able to breathe, not being able to move. For outsiders, of course, you’d look peaceful. Because you can’t move, of course.”

Husband was smiling in agreement; wife wasn’t smiling at all.

This stunned me at first because I had just finished reading a slew of news reports that left me wondering if our culture respects non-humans while despising humans—both collectively and individually.

Perhaps you will understand my astonishment if you think about a few of these reports. It seems that in Quebec, Canada, lawmakers are considering a bill that would mandate every hospital in the province to provide “end-of-life” care—care that is, in essence, euthanasia.

So, could Obamacare lead to greater numbers of assisted suicide? You betcha.

Then, there is the question of organ donation and the recent medical journal article that states: “That patients be dead before their organs are recovered is not a foundational ethical requirement.” In other words, doctors should not mind killing to get organs they need for other people.

Oh yes, and then there’s the idea of hosting a “death dinner” where folks sit around, have dinner and a couple of drinks, and talk about how they wish to die and what they don’t want when they get ready to die.

Nobody could make this stuff up. These snippets expose our culture and the thought processes that affect far too many in our midst, whether they are professionals, politicians, or just plain folks taking their cat in for a final treatment.

I like what palliative nursing consultant Jean Echlin wrote recently:

We abandon the notion of executing our most heinous criminals and now appear to be accepting the idea of executing our most vulnerable citizens. We provide our criminals with good medical, occupational, entertainment, and educational programs for their betterment. In the case of our elderly, we often fail miserably at providing them with quality of life in our healthcare institutions. Many label our elderly and persons with disabilities, including children, as “lives not worth living.”

Her analysis of the situation in Quebec is a mirror image of our own sad social attitude toward the vulnerable and the weak. It seems that so many Americans have forgotten that each and every human being, no matter what his state of being, reflects a mirror image of the face of God.

A cat does not.