Trending Now
You are at:Home»Featured»Monsters, Inc: A Door into the Hearts of Post-abortive Fathers
By Dorothy Joseph on February 6, 2012 Featured, Life Issues & Bioethics, On TV and Movies 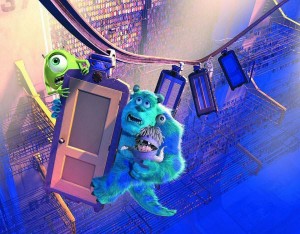 A few years ago, we lost our DVD of Monsters, Inc. (2001, PIXAR) in a basement flood.  It was a small disappointment, and every once in a while our kids mentioned how much they would like to see it again, but it was one of those back-burner “wants.”  This Christmas season, we bought a copy and watched it again (okay, more than once!) and we were reminded of our completely unscientific, unproven theory that at least one of those PIXAR writers is post-abortive, or knows someone who is.

Think about it! The Monster World’s energy dependence on human children’s fears — their screams — is the basis for a ghastly fear of children themselves. The workers sneak into children’s bedrooms, violating their sweet dreams, and terrify them, being scrupulously careful not to touch any part of humanity.

Remember the Child Detection Agency, dedicated not only to keeping children out of Monster World, but to scrub away any toxic particles of humanity?  They went to special-forces-level efforts to ensure that children, ironically upon whom their very future depended, would not in any way sully their environment. (Sound familiar?)

Consider the main characters. Sully: a decent, dependable, top notch performer at work, a good friend, one of the guys, an “every man.” Mike Wasowski: the funny guy, a ladies’ man (at least in his estimation) who is ambitious and likes his cars and his reputation.  They’re great friends and roommates and coworkers, and both of them in their own way seem to be living the prolonged adolescence that our own culture fosters these days.

You all know the storyline: The little human girl “Boo” jumps into their lives and turns them upside down.  Sully’s reaction: after the initial shock and fear, he develops a fatherly concern and love for her as they attempt to return her to her home. Remember his horror when he thought that she had been mashed up in the trash compactor?

Mike’s reaction was different. The initial shock and horror turns into dismay and irritation, especially as this kid interferes with his romantic life and his friendship with Sully. He gets downright violent in the Abominable Snowman’s cave!

Seems like either of these could be a boyfriend’s reaction to news of an unplanned pregnancy. 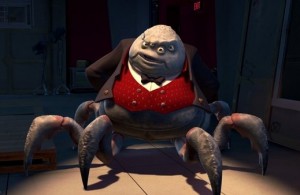 But then, the plot twist. Mr. Waternoose, the boss of the children’s scream-collecting agency, Monsters’ Inc., is actually taking the pragmatic approach to their world’s energy crisis: an evil machine designed to literally suck the children’s screams from their mouths. He and his evil employee, Randall, are delighted to find “Boo” in the factory and have her strapped down ready to suction until Sully and Mike save her.

Geez, do I even need to comment?! USAID, anyone?  Nixon and Kissinger’s discussions, 1973? The modern Democrat Party?

In the end, Mr. Waternoose and all his evil cohorts are discovered and imprisoned after Sully and Mike’s clever plan unfolds, but at a price: Boo is returned to her room, with a last few tender moments with her dear Sully, and then her door must be shredded so that he cannot violate the laws of –- well, really, of common sense and practicality, and all that is obvious — the laws of Monster World.

How many men have tried desperately to save their unborn child from the suction device but in the end are powerless? They can only dream of tender moments. Their very pain even violates contemporary nuances of common sense and practicality.

The greatest part, though, comes at the end, after Sully and Mike market their discovery that children’s laughter actually generates more energy — exponentially, in fact. Not only does their society benefit, but the shock and horror of actual contact with children is gone. Human children are better understood, and appreciated, and the scream-turned-laughter inducing workers at the plant are using their own individual talents and abilities in a much more interesting, fulfilling way. (Kind of like parenting?)

Maybe the General Assembly at the UN needs to watch this movie; their statisticians have been warning them that we need more babies for the past twenty years. 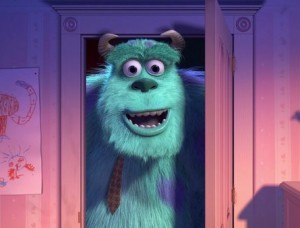 Poor Sully. He misses his Boo dearly. Nothing can make up for that nearly-parental bond. But then a sacrificial grace: his friend, Mike Wasnowski, the perpetual adolescent, the tough guy, points to the door he has painstakingly pieced together with  blistered, splintered hands.  It lacks one tiny piece, which, Mike knows, Sully has treasured since the door-shredding incident. The last piece in place, Sully turns the doorknob…

And the look on his face can only be that of a father who one day is reunited with his precious little one in heaven.

Find, or rent, and watch again!

(P.S. Why did I think of this today? Because a cartoon of Mr. Waternoose, a large spider-monster, throttling a pink breast cancer research ribbon, would be perfect!)