Trending Now
You are at:Home»Featured»‘Mother Teresa Was the Best Missionary of the Millennium’
By ACN-USA News on June 21, 2016 Featured, Those in Need, Vocations 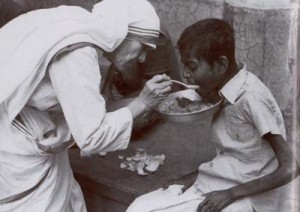 NEW YORK—An Indian prelate has described Blessed Teresa of Calcutta, who will be canonized by Pope Francis Sept. 4, 2016, as the “best missionary of the millennium.”

Bishop Salvadore Lobo of Baruipur, who headed the canonization committee, reported that Christ had said to Mother Teresa in a vision: “Go into the houses, I cannot go alone, you be my face.” Indeed, “for the world today she has become the face of Christ,” the bishop said.

Hindus also understand, Bishop Lobo added, that “service to the poor is service to God.” The bishop reported that during the beatification process as well, a large number of witnesses had come forth, including many Hindus and Muslims. He described the canonization as “a great joy” for all of India.

Bishop Lobo, who met Mother Teresa as a young seminarian and worked with the dying at  her “Kalighat” hospice in Calcutta as a volunteer, described his first impression of her as that of a “transformative saint” who “emanated the personification of Christ.” “She taught the world a lesson: Jesus lives in the hearts of the poor. We shall find His face in them,’ the prelate said.

Mother Teresa was born Anjezë (Agnes) Gonxha Bojaxhiu Aug. 26, 1910 in Skopje (at the time it was part of the Ottoman Empire, today it’s part of Macedonia). Her family was Albanian. At age 18, she entered the Order of the Loreto Sisters. Soon thereafter she was sent to India, where she worked as a teacher until 1946, when she felt the calling to serve the poor.

At first she went alone into the slums of Calcutta, but was then joined by several former fellow students. She founded the order of the “Missionaries of Charity,” which continues to take care of the poorest of the poor all over the world today.

Mother Teresa was already considered a saint during her lifetime and became famous the world over as the “Angel of the Poor.” She received the Nobel Peace Prize in 1979. She died Sept. 5, 1997 in Calcutta (India). Pope John Paul II beatified her on Oct. 19, 2003, only six years after her death. Her liturgical feast day will be the 5th of September.