Trending Now
You are at:Home»Featured»Movie Review: Ex Machina
By Sr. Helena Burns, fsp on May 8, 2015 Featured, On TV and Movies 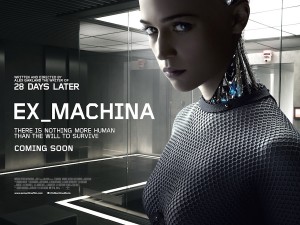 Ex Machina, an updated story on Artificial Intelligence, is a new science fiction classic, with all the bells and whistles of today’s filmmaking, but without a terribly new conclusion about the human or moral ramifications of A.I.

A megalomaniac computer scientist (Nathan) has created a top-secret female robot (Ava) and invited a computer coder (Caleb) to apply the Turing Test to her (essentially how “human” she is) in his remote hideaway and research lab. This film consists of basically three actors: the incomparable Oscar Isaac as the scientist, Domhnall Gleeson as the computer guy, and Alicia Vikander as the life-like robot. That’s it. Are there Academy Awards for casting directors? The international flavor of those behind the film (England, Guatemala/Cuba, Ireland and Sweden) make for a not-quite-Hollywood film (and in this case, that’s a good thing).

Ex Machina has an exceedingly short first Act and then boom. We’re in the riveting and intriguing new world of Act Two. In Ex Machina, the new world is not complex–it’s actually rather simple–but full of tension, danger, suspicion, foreboding and unanswered questions from the get-go.

Minimal electronic music sets the tone for face-to-face encounters between cast members (hardly ever more than two at a time). Who is honest? Who is not? Which motivations are real? The camera cuts back and forth frequently from the contrast of majestic mountains, greenery and waterfalls of Norway (where the film is shot) to the indoor ultra-modern, sleek lab/ living quarters.

It feels like something is subtly being said about men almost preferring the perfection, the fascination of a computer, a thing, to a real woman. Stepford Wives, anyone? The feminists will have a field day with this film, which seems to be partially on the side of oppressed women–human or not–and partially reinforcing inevitable male chauvinism and domination (even if just by showing it and the copious full frontal female nudity).

The nudity doesn’t appear to be terribly salacious (but I’m a woman)–and seems more “plastic.” However, Nathan and Caleb are men. They’re not blind and we know that they’re not strictly platonic sorts. And why did Nathan make a female robot, anyway? (Man creates woman.) Was all the one-sided (female) nudity really necessary?

Nathan’s handiwork is impressive and he knows it. He and Caleb go at it over things like the true nature of A.I., ethics, human feelings vs. human calculations, and what the future of man vs. machine might hold. Sex and gender are philosophically discussed in a somewhat Theology of the Body way. Some might call it an “intellectual film” because of that reason, even though the rigorous exchanges are brief.

I would call it a “not dumb” film, also because it’s totally entertaining. It’s not mind-bending like Inception. It’s everyday stuff that we could apply to all our interactions with all things digital.

Ex Machina is dark and disturbing. It will wrap its whirring, purring, cable-y arms around you as you leave the cinema (must be seen in a cinema–this film cries for the cinematic experience!) and accompany you for a while. It’s a film that begs for serious conversation and commentary.

Definitely not for kids/teens. The slow gore and creepy skin peeling (you’ll see) is altogether called for, but nevertheless, creepy.

When God “programs” humans, it is for the Infinite. When (often God-denying) non-eternal humans program their own likenesses, they program for the finite.