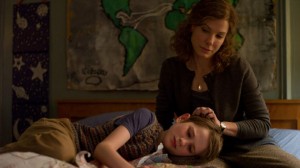 Extremely Loud and Incredibly Close is the story of a boy who loses his father in the Twin Towers on 9/11. Oskar Schell (Thomas Horn) seems to have Asperger’s syndrome, and his dad (Tom Hanks) was the only one who really understood his brainy but socially awkward and phobia-ridden son. Oskar’s relationship with his mother (Sandra Bullock) is distant and strained.

Extremely Loud reconstructs what Oskar dubs “the worst day.” We are taken through the exquisite pain of what families must have endured during and after their terrible losses of 9/11. To “make sense” of the pain (Oskar is all about science, facts and logic) and to be able to feel close to his father, Oskar sets out on a mission to find the lock that goes with a mysterious key found in his father’s closet.

Oskar’s quest takes him all over New York City to meet many, many people, and in the process he must overcome his many, many fears (exacerbated by the trauma of 9/11). He has a fiercely determined and obsessive will, and his general inability to sympathize with others makes him sometimes verbally and otherwise abusive, especially toward his mother.

It’s interesting and enlightening to see the world from this geeky kid’s perspective. There are more and more young people like Oskar, and we will be seeing more and more films incorporating these characters. However, the total improbability of a guileless young boy journeying around NYC alone (although the highly improbable reasons for his safety are later explained to us, and the fact that at one point an older gentleman [Max von Sydow] accompanies him on many of these treks) makes the heart of this tale feel exceedingly unreal.

Although there is a delicate, moving soundtrack, and the dialogue and acting is meticulously executed by the finest in the business, there is just so much artifice to the whole project that it’s hard to forget that “these are actors” and “this is a film”—a well-simulated tale, but ultimately contrived. It hits all the right notes, tropes and hackneyed themes, but the only originality here is getting into a boy like Oskar’s mindset when faced with a horrible tragedy. The clichés are attacked head on: Everyone has a story to tell. Everyone has suffered something.

The value of Extremely Loud? To hear the distinct voice of an Asperger’s kid who moves from headstrong to heartstrong. To look death squarely in the face and know that “love is stronger than death,” even for a little boy who doesn’t believe in miracles.