Trending Now
You are at:Home»Featured»Movie Review: Far From the Madding Crowd
By Sr. Helena Burns, fsp on May 22, 2015 Featured, On TV and Movies 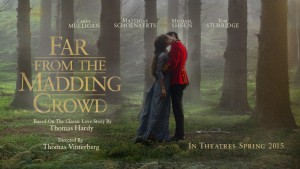 Fans of “Pride and Prejudice” will love the new adaptation of Thomas Hardy’s 1874 novel, Far From the Madding Crowd. It’s a romance of class divisions as well as gender divisions (in the sense that a fiercely independent and independently wealthy female sees no “need” for a husband). Miss Bathsheba Everdene* (the astute and expressive Carey Mulligan) is also a very proud woman by nature, which both serves her and trips her up.

Madding starts off with a bold proposal of marriage, but fans of the Twilight series will love the fact that Miss Everdene has her pick of not two, but three suitors: the farmer/shepherd (Gabriel Oak, played by the hunky, strong and silent Matthias Schoenaerts), the older, socially awkward, paternal squire (Mr. Boldwood, played with precision by Michael Sheen), and the playboy soldier (Sergeant Troy, played with rascality by Tom Sturridge). Which man will she choose if any? These fully-developed characters are brought to life by a harmonious cast.

It’s curious why Hardy would make an assertive, commitment-phobic (she really is) woman like this his protagonist, and, not having read the book myself, I don’t know if she was given any kind of modern upgrade for the screen. Perhaps Hardy was trying to explore the female heart, trying to understand women and women’s motivations.

What Hardy does seem to know very well is a man’s heart, what it’s like when a man truly loves a woman. Perhaps this is really a man’s romantic story. Or maybe it’s just both a man’s and woman’s romance, as movies used to be.

All three men truly love a woman. Hardy seems also to know what it’s like when a woman plays with a man’s heart. Although Miss Everdene states that “it’s not women who jilt men, it’s men who jilt us,” she is inexplicably fickle in her affections and desires. At times she seems completely disloyal, even to herself. She seems to have contracted our contemporary disease of wanting to endlessly sample, never settle down, never be sure, never make a firm decision, always have a “wandering eye.”

A clue to why she is so afraid of trusting, of making the wrong choice, or of being rejected might be captured in a song she sings at a dinner for her farming staff. (This same song is repeated during the credits at the end of the film, so the filmmakers must be trying to make a point.) The words of the song are addressed to a young woman: “Let no man steal your thyme,” because when your time has passed, he’ll get rid of you.

The men in Madding are incredibly loyal and fiercely protective of the women they love. Even though Miss Everdene can take care of herself in many ways, she does need these men for many reasons (as the men need her for many reasons). These are not utilitarian needs, but rather those of a truly human community and communion. Helpmates. (See 1 Corinthians 11:11.) Madding shows us glimpses of how the male/female collaboration can be a peaceful and beautiful synergy on many levels.

Since the setting is pastoral and Miss Everdene is an equestrian, there’s a lot more than tea drinking and mincing about going on in the film.

Had Madding been shot on film, we’d enjoy beautiful landscapes and rich colors everywhere. But, alas, it was not, and one drawback to the film is the paltry, pedestrian color palette. The fine soundtrack, however, is blissfully rich and audibly “invisible.”

These men and women of Madding were bred/taught how to relate properly and well with each other from their youngest years, no matter their state or status in life. Do we teach any kind of proper, becoming, humble, gracious behavior anymore? The question simply is: what kind of a society do we want to live in?

In today’s world of instant gratification, it’s hard to imagine the protocols, manners and restraint displayed in Madding, but the actors inhabit this 19th century milieu convincingly. Personally, I find all the refinement quite civilized and massively appealing.