Trending Now
You are at:Home»Featured»Movie Review: Flight
By Sr. Helena Burns, fsp on November 13, 2012 Featured, On TV and Movies

Drama is not dead! The new Denzel Washington movie Flight—about the aftermath of a plane crash—is living proof. Although the excellent and enticing trailer portrays the film accurately, the film itself is not a “perfect” film. It’s very good, but too long and lacking in consistency. After an incredibly filmed, tense-to-beat-the-band action sequence, and a graceful reveal of the full weight of the brilliant-but-addicted pilot’s (Denzel Washington) predicament, there are some slow scenes filled with nothing but bald exposition that could have been eliminated or shortened.

CAVEAT: The film begins with many, many minutes of mid-range and close-up full-frontal female nudity. This seemingly minor character does become somewhat more significant toward the end of the film. Are we supposed to feel closer to her because we saw every part of her body (and very little of her face)? Are we supposed to feel that Denzel’s character was close to her because he saw (and “knew”) every part of her body? But their relationship seems to be nothing more than casual sex. The immediate, in-your-face nudity was shocking and not pertinent to the story and it was gratuitous female only nudity. We get it without it. The boozy pilot is leading a dissolute life. You can always check the “why” of the MPAA rating on www.fandango.com). This is what it says for Flight: Rated R for Intense Action Sequence, Drug and Alcohol Abuse, Language and Sexuality/Nudity. Information for parents: Common Sense Media says Iffy for 16+

CAVEAT:  If you do not care to hear the F-word (and lots of other crude language) more times than Carter has pills, you may wish to restrain and refrain from Flight.

CAVEAT: If you object to massive amounts of substance abuse of every kind–sometimes glamorized, or at least with a possible takeaway of, “I can use. Heavily. And still lead a pretty normal life. And pull myself together when I need to. And look gorgeous. And function well enough in society. And still get the girl. And still get the guy. And always bounce back,” you may wish to restrain and refrain from Flight.

Flight is out of the gates with a bang, then simmers, then cools off. What is the film about? It’s about blame, lying and addiction.

All of this being said Flight is a total God movie. God is everywhere. Explicitly. He’s always bubbling just below the surface, popping up in every conceivable religious image, humble believer, church steeple, spontaneous prayer, random discussion, etc. “Where was God in this tragedy?” is the resounding subtext and is dealt with from many angles. 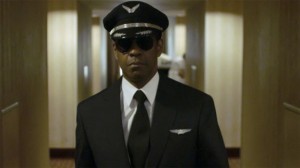