Trending Now
You are at:Home»Featured»Movie Review: Have a Little Faith
By Patti Maguire Armstrong on December 1, 2011 Featured, On TV and Movies 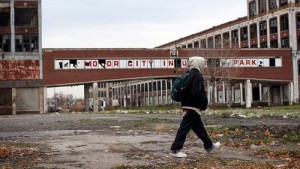 [wp_carousel]ID[/wp_carousel] For some people, the journey towards God begins through relationships with people. Mitch Albom, a Detroit Free Press sportswriter who wandered far from his Jewish roots, experienced God through two very different men: one a Jewish rabbi and the other an African American pastor of a poor, inner-city Detroit church. The story is dramatized in Have a Little Faith, a Hallmark movie that premiers on ABC Sunday at 9 PM Eastern. The screenplay, based on Albom’s first non-fiction book since his New York Times bestseller Tuesdays with Morrie, documents the course of his friendship with these men of God.

The story begins with an unusual request; Albom (played by Bradley Whitfor) is asked to deliver the eulogy—when the time comes—for an 82-year-old rabbi from his hometown, Rabbi Albert Lewis, played by Academy Award-winner Martin Landau. Albom is not religious and feels unworthy for the task. In order to get to know this man better, he begins making occasional trips back to his childhood home to spend time with Lewis. The rabbi challenges Albom to seek more in life than the earthly and to reach out to others.

While opening his eyes to the world around him, Albom writes a newspaper article about an inner city Detroit pastor–Henry Covington (played by Oscar nominee Laurence Fishburne). Covington is a former drug dealer and convict who overcame his past and, along with his wife Annette (portrayed by Tony Award-winner Anika Noni Rose) preaches and helps the poor at I Am My Brother’s Keeper Church. Mitch Albom is awed and somewhat confused at times as he watches the lost and forsaken come to praise God inside a decaying church. As Albom observes Covington from a distance and listens to the testimony of those he has helped, he comes to believe that Covington truly is his brother’s keeper.

Through his visits to these two very different worlds, Albom becomes a part of something deep and lasting. The story takes place over eight years as Albom gradually gets to know these two men; he weaves them together into a life tapestry of love for God and neighbor. He is not just a mere observer, but becomes an active participant, finding common ground while creating a charitable momentum to fix the holes in people’s lives.

As Albom sums up at the end, “It’s not about having the answers in life; it’s about the search for answers—the choosing to believe in something bigger than yourself that makes the journey of faith so challenging and so worthwhile.”

The Bright Side of the Motor City

I am from Detroit, but I am one of the ones who has left. I did not flee the city, but met my husband in the Peace Corps and traveled a route that did not lead back home. I occasionally get back to the area, so I understand Albom’s defense of this city.

“I am often asked, ‘Why Detroit? Why do you live in Detroit?’” he said in an interview. Albom acknowledged that the rest of the country often looks down on Detroit. The only influence such negative opinions have had on him, however, is to go the opposite way. “I’m not going to leave,” he stated. “I can get defensive because I am proud of this city. I came here in the beginning of my career and I am going to stay.”

Detroit is rich in opportunities to expand hearts through helping others. “If you live here, you can’t walk around the city and not see the need; you have to,” Albom said. “There’s too much of a need. If you have anything at all you need to share it.”

Albom’s life has traversed the globe, from studying jazz piano in Boston and playing in a nightclub on an island in Crete, to attending several schools in the East and working and studying journalism in New York. Subsequently, Detroit is not a default ending for him. Instead, it has been a launch pad for living the faith he learned from Rabbi Lewis and Pastor Covington. Albom confessed to living a life where he was less focused on the needs of others. He attributes the experiences he chronicled in his book Tuesdays with Morrie, and those in Have a Little Faith, with moving him into the bigger universe.

“No doubt, the rabbi encouraged it. My wife and I were not blessed to have kids but he told me, ‘What you don’t do for kids you can do for other people.’”

During the era of his visits with the rabbi, Albom met Pastor Covington because of his work with the homeless shelter. “Henry opened his church up a few days a week to the homeless so they would have place to sleep,” he said. “People were sleeping on the floor under a leaking ceiling.”

During the making of the movie, the story’s message hit home. Much of the filming was done at the actual church in Detroit, although half the building was off-limits to the project so it could continue providing shelter for the homeless. “One day, a catering truck arrived to feed the actors and film crew,” Albom explained. “The filming was going on during the homeless night while right outside the church was the catering truck full of food. The actors and extras realized this and started carrying the food down to the homeless shelter.”

Covington died on December 21 of last year, not quite a year before this movie would come out. He had a heart attack in his hotel room the day after appearing on the Today Show with Albom to talk about the story. Albom stated that keeping the church operational was one of Covington’s dreams.  Thanks to publicity, one of Ablom’s charities, Hole in the Wall Ministries, enables the church to continue to inspire and take care of people physically and spiritually. Help has come in many ways, including $25,000 from “Dr. Phil,” who taped one of his shows at the church.

“A fundraising premier of the movie just raised $30,000 to replace 110 windows,” Albom said. “It’s still functioning.  The movie really shows the church in all its glory and decay.

“The book has attracted visitors and hopefully the movie will also draw people in to visit the church and help at the homeless shelter,” he said.

As Albom stated at the end his story, “I am in love with hope.”