Trending Now
You are at:Home»Featured»Movie Review: Her
By Sr. Helena Burns, fsp on January 28, 2014 Featured, On TV and Movies 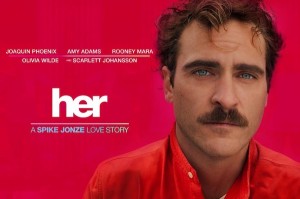 From writer/director Spike Jonez’, Her is a rather extraordinary film. It’s really a science fiction/love story about A.I. (artificial intelligence). Set in what looks like the near future, Theodore Twombly (Joaquin Phoenix doing his best work to date and visually carrying the entire film) works for a company called “Beautiful Handwritten Letters” that composes letters for people. Not business letters or formal letters, but love letters and letters between family members.

Why can’t people write their own? Who knows? But this futuristic world is scarily bland, literal and unnuanced. Everyone and everything feels incredibly dumbed down into simplistic niceness. It seems that advanced technology and the seamless omni-insertion of technology into people’s lives has turned humans into androids, while the androids are more “alive” than humans and want to become more human.

Humans walk around (something like today, but much worse) talking to themselves, communicating only with their multifunctional earbuds.

“Samantha” is a Siri-like voice performed by Scarlett Johansson with such craft that there was a question whether her voice acting could be nominated for an Oscar (it couldn’t). Theodore, lonely and undergoing a divorce, begins to fall in love with her, and Samantha begins to evolve rapidly — having “experiences” and learning about the world through Theodore. Samantha is always there for him and seemingly deeply understands him (she reads all his email) and even fights with him like a real girlfriend would. Dating one’s OS (operating system) becomes an accepted “thing” in Theodore’s society.

But all shall not be well. I won’t spoil the ending–one of the gentlest, tenderest, humanest sci-fi endings since Blade Runner–but it gives rise to the question whether humans and A.I. could ever truly interact on a purely and fully human level. Can Samantha ever truly “be” human and understand humans, especially when it comes to love?

Humans, it seems, are unlimited by their limits, and A.I. are crippled by their boundlessness. Haven’t we ultimately created them as their own inorganic “species” to do their own thing, which may even be outside of our control?

It doesn’t matter how many awards you get for this. You blew it.

So sorry for your loss,

So, am I recommending you see this film? I usually don’t give my opinion on this either way, but given the above circumstances: www.commonsensemedia.com rates this film “iffy” for 15+. I rate it “iffy” for 50+ unless those scenes are excised. Perhaps www.clearplay.com will make it available. (“Clear Play” sanitizes films with the blessing of the studios. I’m normally not in agreement with such measures–except for family viewing–but it’s getting bad, folks.)