Trending Now
You are at:Home»Featured»Unequal Distribution of Economic Freedom
By Alejandro A. Chafuen on January 27, 2014 Featured, Government & Politics, Law & Justice, The Economy 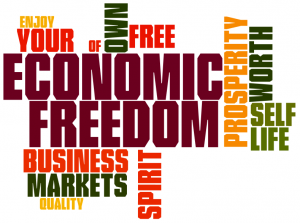 Why so many poor can’t improve their lot

While the church and Christian moralists have always spoken about the rich and the poor, and condemned those who put wealth, or anything else, above eternal life, it was only in the 20th century when church authorities began to make frequent empirical statements about the number of rich and poor. Pope Francis is the latest example. He writes in the latest apostolic exhortation that “While the earnings of a minority are growing exponentially, so too is the gap separating the majority from the prosperity enjoyed by those happy few.”

During the 20th century, inequalities of wealth became a favorite topic of intellectuals of different persuasions. Vladimir I. Lenin developed his theories of imperialism touching upon the topic of nations continuously getting rich while others grew poor. His views on how the rich capitalist nations exploit others still influence the world today.

Corrado Gini, who in 1927 wrote, “The Scientific Basis of Fascism,” developed a method to measure inequality called the Gini coefficient. The gap between the rich and the poor, as measured by this index, led to numerous studies that soon began to influence moralists of all bents, including those in the Catholic Church. During the second half of the 20th century, economist Raúl Prebisch developed a theory of center-periphery similar to Lenin’s. It stated that as the cards were dealt, the rich countries at the “center” were bound to get richer and exploit the poor countries at the “periphery.”

In 1968, the Episcopal Conference of Latin American Catholic Bishops met in Medellin, Colombia. Some of the Medellin document echoed Lenin and Prebisch: “The countries which produce raw materials—especially if they are dependent upon one major export—always remain poor, while the industrialized countries enrich themselves.”

Pope Paul VI, in his encyclical Populorum Progressio (1967) used similar language and analysis. He wrote that the economic system left to itself widens the gap between rich and poor nations: “Rich people enjoy rapid growth whereas the poor develop slowly. The imbalance is on the increase.”

In “Caritas in Veritate,” Pope Benedict XVI repeated what “John Paul II has already observed: the demarcation line between rich and poor countries is no longer as clear as it was at the time of Populorum Progressio.” Benedict mentioned corruption as exacerbating the problem. But he did not mention that it is precisely those countries with more economic freedom which show lower levels of corruption, and higher levels of economic and human development.

The rich can, and at times have, gotten richer at the expense of the poor. This happens when they capture the government and reduce opportunities for the poor. When Paul VI and other religious authorities speak about an economic system “left to itself” they actually mean what they say. This is a system where businessmen make the rules for their own advantage rather than working within a framework of rule of law. That is why John Paul II sided with his predecessors in Centesimus Annus (42) when he criticized the type of capitalism in which “freedom in the economic sector is not circumscribed within a strong juridical framework which places it at the service of human freedom in its totality and sees it as a particular aspect of that freedom, the core of which is ethical and religious.” Nevertheless, he endorsed a capitalist system “which recognizes the fundamental and positive role of business, the market, private property and the resulting responsibility for the means of production, as well as free human creativity in the economic sector … even though it would perhaps be more appropriate to speak of a ‘business economy,’ ‘market economy’ or simply ‘free economy.’”

Hernando de Soto, from the Institute for Liberty and Democracy, showed how an overregulated economy creates such high costs of entrance to the market for the poor, that it ends up excluding them. In addition, and to explain why so many poor can’t improve their lot, I have argued that we need to look into the unequal distribution of economic freedom.

The unequal distribution of economic freedom leads to a system where the rich get richer because they are the only ones who can afford the costs of legality. The poor get stuck with little access to legality and poor essential services. In most indices that measure rule of law, only a minority of countries qualify as having a strong and just juridical framework. In those countries the population, as well as moralists, see how the rich who are close to the government continue to enrich themselves even in periods where most of the population is suffering.

Unjust inequalities exist, yet saying that the rich get richer and the poor get poorer can still be misleading and dangerous. When speaking about inequality, Gini and Prebisch in the past, and Krugmann, Stiglitz, in the present, use macroeconomics. By its nature, macroeconomics is explained in terms of aggregates, groups and averages. The human person is lost in these aggregates and categories. The Pope and his advisors should be aware of this and should focus more on upward mobility, opportunity, personal responsibility, and family relationships. These factors, rather than redistribution, hold the key to full personal and societal development.

[Editor’s note: a longer version of this article first appeared at Forbes.com.]