Trending Now
You are at:Home»Featured»Movie Review Les Miserables
By Leticia Velasquez on January 3, 2013 Featured, On TV and Movies 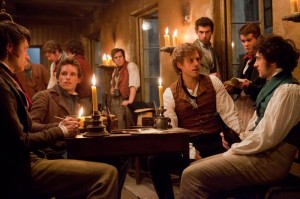 There is something in me which resists popular movies, music, and TV series. That new piece of entertainment that everyone is talking about so often disappoints me by its shallowness or downright offensiveness. “It can’t be good if it’s that popular;” I argue, “we have such abominable collective taste”. A quick view of the cable film offerings for New Year’s Day, including such winners as “The Hangover” and “Knocked Up” confirms this cynical attitude about entertainment.

I was finally convinced by my insistent teenagers that I must see Les Miserables.  I had seen the play on Broadway, as well as three earlier film versions, so it wasn’t the story I was resisting, just the fact that the latest version is so popular. There must be some Church bashing, offending of traditional morality, or just plain banalization of Victor Hugo’s eternal themes of repentance, redemption, and sacrifice, I feared. I did not want to see a beautiful story deconstructed by some egotistic director.

I humbly admit I was wrong. From the breathtaking opening scene, the soaring music and ethereal cinematography held my emotions captive, causing me to laugh and even weep.  I was not alone. The theatre was full of people — from seniors to college-age kids — who stayed behind after the credits, engaged in passionate discussions of the film’s themes, the advantages of operatic style, and even the idea of redemptive love.

The poignant acting of Anne Hathaway (Fantine), Hugh Jackman (Jean Valjean) Amanda Seyfried (Cosette as an adult) and Russell Crowe (Javert) was the perfect complement to the passionate score. Only Amanda Seyfried and her younger counterpart Isabelle Allen (young Cosette) have the angelic voices required by the demanding songs, but that didn’t diminish the film’s commanding impact. It rather heightened it as I was moved by the raw emotions in voices, not their beauty. Jean Valjean was in agony for much of the film, and if his voice had the range and power of Pavarotti it might have been distracting, even comical. Did it ever bother you that Mimi in La Boheme sings a full-bodied aria just before succumbing to consumption? Save the operatic voices for the CD, the actors’ singing was sensitive to the story and kept this viewer engrossed more than any previous version.

Les Miserables was beautiful in an even more vital manner. Never in recent films has the Catholic Church’s role in the life of an individual been so poetically depicted. The genial bishop who evoked St Jean Vianney, the feminine grace of the wimpled nuns, the splendor of the chapels of Jean Valjean’s conversion and final departure into heaven: the Catholic Church’s important role in the conversion of a bitter convict to a saint is one which is drawing even the cynical to the theatres. We have experienced God’s grace; we know it when we see it, and there is nothing more rewarding than to see a true artist’s depiction of it on screen.

The screenwriters, composers, and directors not only didn’t hinder Hugo’s original intent, they magnified it using the best of special effects, cinematography, and orchestration. That is what art is meant to be, raising one’s mind and heart toward heaven, or, in other words, prayer. Les Miserables reaches that height at times and I left the theatre comparing my own attitude towards my loved ones to Jean Valjeans’. In other words, were there more films of the beauty and power of Les Miserables there might be more Jean Valjeans in the world.

The moral impact of the film rests upon stark contrast between the noble and ignoble: depictions of sexuality, immodesty, disturbing violence and vulgarity. This is not a film for children or young adolescents. Older teens will find this film inspiring. It’s the must see of the year.