Trending Now
You are at:Home»Featured»Movie Review: Liberating a Continent: John Paul II and the Fall of Communism
By Sr. Helena Burns, fsp on July 27, 2016 Featured, On TV and Movies 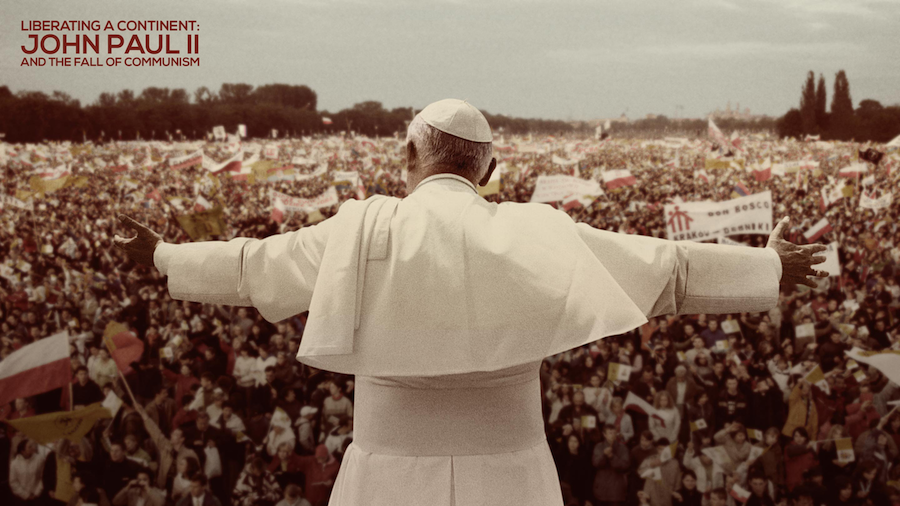 I’m going to call the latest documentary on John Paul II an “almost perfect documentary.” The title is: Liberating a Continent: John Paul II and the Fall of Communism. Why is it almost perfect? Because it’s Rolls Royce super-classy in every way. The production values are off the chain, the august interviewees always on point, and the analysis goes deep.

The range of the historical material is vast, and yet the film manages to be meditative, fast-paced, sentimental and bracing all at one and the same time. The cinematography and beautifully restored footage are rich and intense, and the soundtrack is a non-stop, full-bodied symphony of meaning in itself.

As the title indicates, there is nothing “small” about this documentary in its feel or scope. And the subject matter is done great justice. For JPII-aholics and documentary-aholics like myself, as well as for those who lived this history, Liberating adds yet more pieces to the puzzle and threads to the tapestry of the socio-religious genius of John Paul II.

Did the Kremlin have a social plan? So did the Polish pope, who purposefully united himself to all Slavs of the persecuted Eastern European Church, and all citizens behind the Iron Curtain.

The film begins with a short retrospective of Communism, then on to Poland and World War II, in order to situate Karol Wojtyla’s (John Paul II’s) life into this reality. This is done through the technique of state-of-the-art graphics, maps, dates, still photos, etc., that are visually effective and illuminating.

Featured front and center in the workers’ struggle is the Polish labor union SOLIDARITY. The Communists’ minimalistic vision of the human person was: a cog in the machine of the State which is supreme. Man exists to serve the State and for no other reason.

Freedom, creativity, initiative and entrepreneurship were non-existent. Labor unions were not allowed. Workers had no rights and working conditions were often harsh, unbearable and unjust.

Rounding out the documentary are brief accounts of other nations (basically all of the former U.S.S.R.) following suit after Poland and shaking free of Moscow.

Triumph of the Human Spirit in Christ

The triumph of the human spirit shines mightily in Liberating. A human spirit informed by and inseparable from Jesus Christ. Would Communism have “fallen” without John Paul II? Most likely eventually, but perhaps in a very different, even violent way that might have ushered in something equally as malignant.

Liberating is intent on unmasking the fact that the resistance to Communism was primarily a spiritual one. The military might of the Russian Soviets could not be fought on a battlefield with physical force. John Paul II, the statesman of faith and prayer and towering moral authority, is seen as almost single-handedly inspiring the defeat of the iron grip of tyranny in his homeland.

Why is it “almost” perfect? Two reasons. Although the content is thorough, informative and edge-of-your-seat engaging, a few introductory sentences here and there seemed to be called for. The documentary is never exactly oblique, but it does assume you know a little bit more than what it is telling you. That, for example, you understand the basic tenets of Communism. That you know who Stalin was, etc.

In other words, the documentary assumes that you have a basic knowledge of 20th century world history, which, very sadly is not the case with the average person under 40. And film has become a crucially important means by which younger generations learn history!

But make no mistake: this is a glorious film.