Trending Now
You are at:Home»Featured»Movie Review: Men, Women and Children
By Sr. Helena Burns, fsp on October 17, 2014 Featured, On TV and Movies 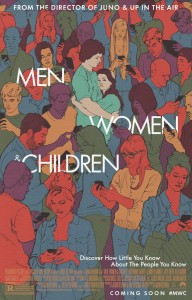 If this was just an easy-sleazy-oh-boy!-tech&sex-is-a-vast-new-area-to-mine! kinda film, I wouldn’t even bother reviewing it. But I do think it’s something more than that.

The film begins in outer space with Emma Thompson’s voice-over, so we know this is going to have some big, philosophical resonance. The narration is clinical, dry humor that becomes very detailed once we situate ourselves on Earth with certain families. Families with teens.

Since there is no God, Carl Sagan–in the voice-over and in the body of the film–becomes our guru because he, at least, can explain something of “the universe” to us. (But of course, in this film and IRL, did you ever notice how humans keep using personification regarding the universe? “The universe doesn’t care.” And trying to personify evolution? “Evolution tells us that monogamy is unnatural.” Clearly, the human being is looking for the Personal. The human being is looking to be cared about by Someone and even to obey Someone wiser than ourselves.)

Without getting too spoiler-y, the point is made loud and clear (albeit at the very end) that sex is great, but most of us really want the intimate relationship that is supposed to come with it.

The heart of the film is a teenage couple who use media fairly well and forgo sex for a deep, romantic friendship.

This film in no way condones any kind of online or offline sexual shenanigans, but rather stares them down and shows them up for the sham and shame they are, with a such a masterful touch that things don’t get too heavy, and we are entertained and not preached to. Reitman is an unflinching but not sadistic director.

The fact that uncommitted “love” and sex is deeply unsatisfying is plain to see in MW&C. But, as Fr. Thomas Loya–a Theology of the Body teacher–always says: “No matter how intelligent and well-meaning we are, we will often utterly ruin our lives grasping at what looks like true love and true sex because these desires are so strong in us.”

I really do believe we need more films like these–a lot less graphic, please? We get it, we get it, thanks–that examine our brave new cyborg world. The fact that this film portrays still-searching-for-themselves-crazy-mixed-up-parents along with their almost-adult-teens (and no “children”) is significant, because in today’s world there often seems to be hardly any difference between adults and teens; the adults acting regressively and the teens acting beyond their years.

Unfortunately, the one lone parent (Jennifer Garner) who actually seems to be concerned about her daughter’s media use, does not trust her (trustworthy) daughter at all and goes way overboard tracking her every digital move. She even hosts a meeting for parents about their teens’ media use. I think I’m going to use this scene as an example of “Media Literacy & E-Parenting Done Very Badly.”

Men, Women & Children is an extremely contemporary film, but of course, will be outdated in approximately six months.