Trending Now
You are at:Home»Featured»Movie Review: Mom’s Night Out
By Sr. Helena Burns, fsp on May 14, 2014 Featured, On TV and Movies 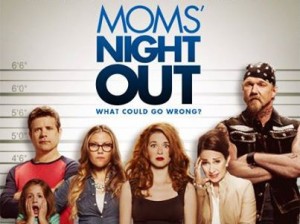 Just in time for Mother’s Day comes a genuinely fun and funny film about the crazy adventure that is parenting, specifically motherhood (with a serving of fatherhood on the side). If you’ve seen the snappy trailer, the movie does deliver on its promise, and there’s lots more LOLs where that came from. But….

You’re making some really great films these days. You’ve got a lot of the right stuff, all the elements, but you must, puhleeeeze: PICK. UP. THE. PACE. We are contracting narcolepsy watching your characters SPIT. IT. OUT. and WRAP. UP. THE. SCENE.

Ever so grateful,
Northern Christian audiences

As I was saying, this is a great little film, but about that pacing? The film starts off at frenetic, breakneck speed with voiceover from Allyson (Sarah Drew), the most stressed-out Mom (with three little kids) in her group of Mommy friends. She’s really in a bad place, allowing her perfectionism and control-freakiness get the best of her.

We’re given lots of rapid-fire information in a little time to set up the rest of the film. There’s a great use of visuals: intercuts, animation, graphics, cutaways, freeze frames, subtitles, etc. (the best is the pop-up texts with one Mom’s hilarious “auto-correct” fails). But then, like an inverted pyramid, the film just gets slower and slower and s-l-o-w-e-r. We’re already enjoying the film, so we have no problem going along for the ride, er, crawl.

The premise is simple: a bunch of good Christian Moms from the same church, including the pastor’s wife (Patricia Heaton), just want a break, a few hours to themselves at a fancy restaurant. However, as the saying goes: “Man’s work is from sun to sun; woman’s work is never done,” and the rather inept hubbies/fathers can’t quite handle things on their own.

Actually, none of the adults in this film seem terribly grown up. A baby goes missing (not belonging to any of our Moms) and the film becomes about finding the baby (last known whereabouts: a tattoo parlor). Or rather, the film should have become about saving the baby (Hello? Missing baby?). The problem is, the baby is not directly connected to our protagonist, (it’s her husband’s half-sister’s) so we now have a conflict of focus.

Quite often, and rather jarringly even for a comedy, other petty concerns that are closer to our main character’s heart take precedence. Sometimes the baby gets lots in the shuffle of the three ring circus that is this movie, and even the baby’s mother seems to forget her objective. There’s a real lack of desperation and urgency, along with very unreal (mild) reactions to this emergency.

All that being said, the dialogue is superb and truly humorous all the way through (unlike so many supposed “comedies” today). The acting is also quite excellent. At UCLA, we were taught that comedy is HARD. It’s the hardest genre of film, believe it or not. The only measure of a comedy’s success is if people laugh. That’s it. And we do.

Timing is everything in comedy. Our actors were fine with the timing, but the overall pace of the film diminished its effectiveness. Our minds already figure out a few split-seconds ahead what’s going to happen. Had the film been cut smart and terse like the trailer, it would have tightened things up a lot and we would have had gag upon gag without time to breath between guffaws. (Perfect timing is part of what makes “My Big Fat Greek Wedding” so successful.) Get into the scene late, leave early.

I hope I’m not being overly critical, because the film really is enjoyable (epic silliness!) and has great advice for Moms in the end, throughout its multiple endings.

Without giving too much away, let’s just say that the takeaway of Mom’s Night Out is about letting ourselves off the hook when we’re beating ourselves up or are totally unrealistic in our expectations.

We need to step back and question where the SCRIPT is coming from that we are trying to follow. Our own overblown dreams? Our friends? Peer pressure? Our parents? Images that the media tells us we should live up to? Worries about the future? Why don’t we write our OWN script? Why don’t we count our blessings? Why don’t we “resign as general manager of the universe” for our own peace of mind? Why don’t we start with what’s possible, what’s right in front of us?

This is a Christian-produced film: Provident Films and Pure Flix, and you’ll recognize actors from “Fireproof” and “Courageous.” This is how Christians swear: “Oh, crud.”

The story takes into account the reality of today’s living without getting too gritty or serious, but tries to steer us (though the characters’ foibles) toward the path of contentment in the midst of duty, sacrifice, the unexpected, the disruptive and the uncontrollable. God is always our answer and our Rock, but how that practically plays out will look different for each of us, depending on our personalities, issues and life experiences.