Trending Now
You are at:Home»The Catholic Family»Education»Thousands of Boston Catholics Pray Against Harvard’s Satanic ‘Black Mass’
By Hilary White on May 14, 2014 Education, Featured 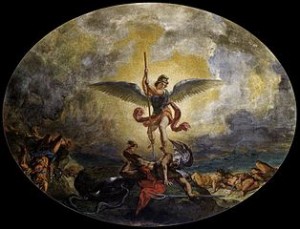 Thousands of Catholics and non-Catholic supporters turned out for a prayer service Monday night, processing through the streets of Boston and singing hymns in response to a threat by a Harvard university secularist group to hold a Satanic “black Mass” on campus.

Although a statement from the group, the Harvard Extension Cultural Studies Club, claimed Monday that the event had been cancelled, photos have been posted to the Satanic Temple’s Facebook page that were claimed to be of a “Black Mass” at the Hong Kong pub.

The student group claimed beforehand that it was not meant as a genuine religious ritual but merely a “cultural” expression, but the Satanic Temple indicated on their Facebook page that it was intended as a direct offence to the Catholic Church’s most cherished beliefs.

The student group said, “Our purpose is not to denigrate any religion or faith, which would be repugnant to our educational purposes, but instead learn and experience the history of different cultural practices.” The club added “unequivocally” that they would not use a consecrated Host.

About 2,000 people, including Harvard’s president Drew Faust, participated in the Eucharistic procession and Holy Hour prayer service on campus at St. Paul Parish. The prayer service was sponsored by the Harvard Catholic Student Association and supported by the Archdiocese of Boston.

Faust had issued a statement calling the event “abhorrent,” and an act that has its “historical origins as a means of denigrating the Catholic Church.” She announced that she would be attending the Holy Hour at St. Paul’s Church.

“It mocks a deeply sacred event in Catholicism, and is highly offensive to many in the Church and beyond.”

Faust added, however, that the university would not shut the event down. “Vigorous and open discussion and debate are essential to the pursuit of knowledge, and we must uphold these values even in the face of controversy,” she said. “But even as we permit expression of the widest range of ideas, we must also take responsibility for debating and challenging expression with which we profoundly disagree.”

The Archdiocese of Boston issued a statement expressing “deep sadness and strong opposition” to the “distressing news” of the event.

“For the good of the Catholic faithful and all people, the Church provides clear teaching concerning Satanic worship. This activity separates people from God and the human community, it is contrary to charity and goodness, and it places participants dangerously close to destructive works of evil.”

Cardinal Seán O’Malley told local media he was “disappointed” at the decision by Harvard not to shut down the event. He told reporters that the reason Catholics are offended by the event could be found simply by looking up “black Mass” on Wikipedia. The first sentence of the Wikipedia entry calls it “a ritual performed as a sacrilegious parody of the Roman Catholic Mass.”

“I was hoping that Harvard would see how offensive and how evil this was, and at least ask them not to do it on their property,” he said.

The Harvard Extension Cultural Studies Club group issued a statement the day of the event saying it was cancelled because “misinterpretations about the nature of the event were harming perceptions about Harvard and adversely impacting the student community.”

But the Satanic Temple Facebook page posted a photo at about 10:30 pm Eastern Standard Time with the caption, “Black Mass taking place at the Hong Kong in Harvard Square within the hour.” One commenter wrote, “Just got back from attending the black mass at the Hong Kong. Big ups to the Hong Kong for allowing it to take place.” Another added, “As a theistic (or, perhaps more accurately, deistic) Satanist, I support my atheistic fellow Satanists. Satanism is a way of life, an individual path.”

Another photo on their site shows a group of costumed demonstrators, captioned, “Satanic rights activists, Harvard Square, post-Black Mass shut-down.” Another commenter said, “The news stated it never happened. If it isn’t on the news it didn’t happen right?”

Throughout the weekend debate on the internet raged over the event. The organizers at first claimed that a consecrated Host had been illegally obtained for what they had called a “reenactment” of a Black Mass. Catholics believe that the Host is the actual, physical body and blood of Jesus Christ miraculously present under the appearance of bread. The group said the event was being facilitated by the Satanic Temple.

Later the group issued a statement that no Host would be used, though this did nothing to quell the outrage.

The Satanic Temple is the group that recently announced they had ordered a statue of Satan and a pair of children, which they intend to erect in front of the Oklahoma State House.