Trending Now
You are at:Home»Featured»Movie Review: The Jewish Cardinal
By Sr. Helena Burns, fsp on July 11, 2014 Featured, On TV and Movies 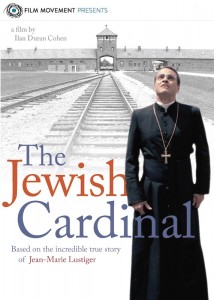 The 2013 film (now on DVD and Netflix) The Jewish Cardinal is the life of the Cardinal Archbishop of Paris, Aaron Jean-Marie Lustiger who died in 2007. May I say that this is the most tastefully, smartly irreverent life of a prelate ever on film? Jewish filmmaker, Ilan Duran Cohen, gets both Judaism and Catholicism (not an easy feat) and presents them with depth and sans one-dimensional cheesiness.

I was well aware of Lustiger while he was alive (and even have one of his books unread on my bookshelf), but didn’t really know much about his story. It has been a pleasure getting to know this brilliant, hot-headed, chain-smoking (hey, he’s French) cleric whom John Paul II chose to be Paris’ Archbishop and then Cardinal, specifically because he wasn’t “a doormat.” When Lustiger wanted to know whether he was chosen simply because he was a “prized” convert, the pope made it clear that he was expecting Lustiger to restore Jesus to his rightful place in a France that has lost its faith.

Whoa. I remember so distinctly John Paul II visiting France early on in his papacy and berating the French rather forcefully: “France, eldest daughter of the Church! What have you done with your baptism?!” Papa could really lay it down when he had to. Lustiger and Wojtyla’s destinies are so intertwined in this film–as in life–and the actor who plays John Paul II really mastered the man, especially his mischievousness. Lots of chuckles.

The Jewish Cardinal is a bit of a recent history primer of sorts as well: the polarized Church in France, Poland and the Holocaust, Communism in Eastern Europe. I brushed up on my own knowledge of these areas, sharpened my understanding and learned many interesting facts: Kaddish was said for Lustiger on the steps of Notre Dame Cathedral before his funeral!

The film slowly reveals to us (good storytelling) why Lustiger converted. We also learn that his mother was murdered at Auschwitz. One of his many dilemmas in life was being Jewish and Christian, with neither “side” seeming to fully accept him or his preferred dual-identity.

This life of Lustiger is good filmmaking in general, and in particular, showcases how you make a film about an interesting Church figure with realism, honesty, passion and transparency, and without boring deference, doctrinairiness, plasticity and sanctimony. The dialogue is on fire (as was Lustiger, it seems)! The story moves along and proffers as much action as it possibly can in a story like this.