Trending Now
You are at:Home»Featured»Movie Review: The Miracle of Marcelino
By Sarah Kozak on November 24, 2012 Featured, On TV and Movies 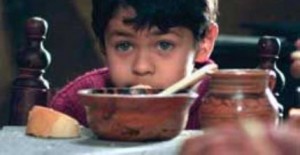 “Whoever humbles himself like this child, he is the greatest in the kingdom of heaven,” Matthew 18:3-4. These words of Jesus resonate in the movie The Miracle of Marcelino.

Set in the time of the Mexican Revolution, The Miracle of Marcelino tells the story of a young Mexican boy named Marcelino (Mark Hernandez Mosqueda) who as an infant, is left on the doorstep of a monastery and is found by one of the friars who lives there. After a futile search to find the boy’s parents, the friars agree to raise the baby themselves and give him the name Marcelino.

Several years pass, and the movie continues with Marcelino growing into a playful, inquisitive, and adorably cute young boy. He becomes friends with another boy named Eleuterio, who is living in the area with his family, and the two of them frequently play together. Marcelino observes the close bond between Eleuterio and his mother and frequently asks the friars where his own mother is.

The main action in this movie is the violence of war that was occurring in Mexico at this time in history. The violence eventually reaches the region of the monastery. The conflict is between a band of revolutionaries and the Mexican army. In the midst of this fighting however, Marcelino remains a carefree young boy with a caring heart. One day he climbs into the attic and finds an old crucifix. He recognizes the figure on the cross as Jesus, and proceeds to bring him bread and wine assuming that He must be hungry. What happens next is something that you will have to find out.

One of the things that I found very attractive in this movie is how it displays the beautiful innocence and trusting faith of a child. It really made me think about my own personal relationship with Christ. This movie showed me how to be close to Christ in a very simple way.

This story in this film is very beautiful but it was paced was rather slow at times. Another point is that even though it is out of compassion that Marcelino brings food to Jesus on the crucifix in the attic, he originally found the crucifix by disobeying the friars. Marcelino also steals food from the friars to take to Jesus. God does reward Marcelino for his kindness, but what he did to the friars was wrong, even if the food was for “Jesus”. While stealing isn’t depicted as a good thing, parents with younger children may want to discuss this scene with them. Also since the movie was originally made in Spanish, the movie has to be watched with subtitles unless you are fluent in Spanish.

Although this movie is centered on the story of a little boy, I wouldn’t recommend this movie for younger children. Several people are killed and there is a lot of shooting. Two scenes are especially graphic. In one, a young teenage soldier is shot in the leg and it is rather bloody. Another scene shows two men being executed and they show a close up of one of the soldier’s faces as he says his last words. The audience sees this man’s bloody face and clothes.

This is one of the few Spanish movies I have actually seen advertised in the United States, other than For Greater Glory. It’s interesting to see movies about different cultures and this movie depicts a part of Mexican history. Overall, it’s a very enjoyable movie.