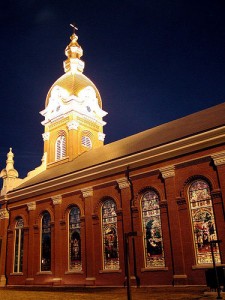 According to the Vatican II document Inter Mirifica (Decree on the Media of Social Communications), media organizations “should see to it that communications or presentations concerning religious matters are entrusted to worthy and experienced hands and are carried out with fitting reverence” (IM 11).

This, apparently, would be news to writer Phyllis Zagano and her editors at the National Catholic Reporter.

In any event, all concerned owe Bishop Robert W. Finn of the Diocese of Kansas City-St. Joseph an apology for a June 8th article in which his good name and reputation were besmirched with an irreverence that borders on the calumnious.

In the article, Zagano asserted moral equivalence between His Excellency and the likes of an adulterer (Arnold Schwarzenegger), a serial philanderer (Anthony Weiner), and a pair of alleged sex offenders (Dominique Strauss-Kahn and Mahmoud Abdel-Salam Omar) of recent headlines.

Bishop Finn’s crime? As His Excellency has publically and with great humility maintained, failing to act as decisively as he may have in addressing suspicions about a pastor who exhibited signs of an unhealthy attraction toward school children. This, as hindsight recently made clear when the priest was eventually discovered to be in possession of child pornography at which point he was promptly arrested.

For Zagano, who appears rather prone to imagining misogynistic boogey men lurking behind every pillar in the halls of ecclesial power, the common thread that binds Bishop Finn to the aforementioned list of newsworthy cads is all too obvious — “testosterone.”

Revealing far more about herself than the moral character of Bishop Finn, Zagano puts what appears to be a convoluted feminist worldview on display for all to see as she rhetorically asks, “How did we end up with a diocesan bishop who ignores the report of near-criminal behavior from a woman Catholic school principal?”

Yes, you read that correctly. Zagano is actually suggesting that the very same report issued from a male principal may have nipped this thing in the bud — a laughable proposition at best.

Her blatant misrepresentation of the facts aside (as Bishop Finn did not by any reasonable measure “ignore” the –reported behavior), one cannot help but feel embarrassment for Zagano — an Adjunct Professor of Religion at Hofstra University — for making such a small-minded suggestion in a public forum.

Seriously, it reminds me of a time when a drunken coworker made a spectacle of himself at a swanky company function. It was his own darn fault, of course, but the humiliation was so tangible that everyone could feel it.

Now, I don’t know Phyllis Zagano any more personally than she knows Bishop Finn, but it seems pretty obvious to me just from a cursory review of the broader body of her writing that she’s no more “the enemy” than my old coworker was the typical irresponsible drunkard.  That said there’s no denying that both of them stepped way out of line.

In the present case, Zagano’s condescending and disrespectful treatment of Bishop Finn is nothing short of reprehensible.

To make matters worse, it seems rather obvious that the wounds being inflicting upon this good and humble shepherd are as little more to the perpetrator than an acceptable amount of collateral damage in a battle to score totally unrelated pet ideological points.

Dizzying though it may be, by following Zagano’s meandering train of thought it becomes rather clear – the issue for her has nothing whatsoever to do with protecting children from creeps; it’s really all about seizing an opportunity to belittle “conservative” churchmen in furtherance of favored causes.

For example, while desperately seeking to give the appearance of credible research in support of her unfounded character assassination-of-convenience, Zagano informs her readers that Bishop Finn was ordained to the episcopate by… hold on to your seat now… Cardinal Raymond Burke, and horror of horrors, Bishop Finn “appears to be his protégé!”

The Third Secret of Fatima it’s not, I know, but the strategy itself isn’t terribly difficult to comprehend as invoking the name of Cardinal Burke in the Reporter is like whispering “Halliburton” at a White House dinner party these days — it’s low hanging fruit for the progressive appetite.

Zagano then throws another shovel load of excrement against the Cathedral wall by pointing to Bishop Finn’s commitment to “a highly traditional form of religious life,” serving as he does as President of the Institute for Religious Life (IRL).

I challenge Zagano or anyone else to find even one blameworthy (never mind relevant) proposition coming forth from the IRL at His Excellency’s direction. It simply isn’t there.

Undaunted, however, Zagano pontificates, “The internal political bent of Finn seems to coincide with that of other bishops who have either covered up scandal or vociferously criticized moderate-to-liberal American women religious, or both.”

One notices that for Phyllis Zagano, who can’t seem to think her way out of the slog of perpetual female victimhood, venerable Catholic tradition regarding the spiritual demands of consecrated life among women religious is nothing more than a matter of personal politics. More telling still, however, is her clumsy and embarrassingly unconvincing attempt to indict Bishop Finn by equivocating the covering up of scandal (something that no credible person has ever accused His Excellency of doing) and publically criticizing the shenanigans of “moderate-to-liberal” religious orders.

Like a gunman (ahem… make that, gunwoman) on a merry-go-round, Zagano then attempts to take aim at clerical celibacy.

Pointing to the fact that Bishop Finn entered minor seminary in junior high school, she imagines, “As a ‘lifer’ he probably didn’t sneak smokes behind the barn, forget his homework, or go to drive-in movies in a car with a generous back seat.”

Again, remind yourself of exactly whom Phyllis Zagano is speaking in this, a manner that is far more befitting a bunch of teenaged boys than a grown woman who wishes to be taken seriously on a matter of grave concern in the Catholic Church.

“An all-male environment from the age of twelve can ensure celibacy,” she declared, “but at what price?”

It can? I’m reasonably certain Rembert Weakland would disagree, but never mind that. The very suggestion that a rodeo in the back seat of daddy’s Buick somehow prepares one for the difficult task of governing a diocese is not just idiotic; it’s the height of irreverence and a sure sign that the Reporter entrusted this particular writing assignment to anything but “a worthy and experienced hand” (ibid).

“If the only way to get celibate clergy is to lock up twelve-year-olds until they are ordained, maybe the hierarchy should reconsider requiring priestly celibacy,” the Professor finally proposes as her idea of a plausible remedy to a problem she hardly even came close to articulating.

In the end, engaging Phyllis Zagano’s feeble arguments on their merit is like barrel fishing with a bazooka, and others have already done so well.

The bigger issue in my mind is the duty that is incumbent upon media organizations and their members, especially those who dare to fly a “Catholic” banner, in adhering to a reasonable standard of decency and reverence.

While Phyllis Zagano and her editors are free to make fools of themselves, depleting whatever dwindling supply of Catholic credibility they may have left in the process, it is not their purview to treat Bishop Finn and his good reputation as just so much expendable ammunition in whatever unrelated ideological battles they may choose to engage.

The advice that I gave to my drunken coworker way back when is just as applicable to Zagano and the Reporter today:

Clean yourself up, take responsibility for your mistakes, and apologize before it’s too late. What little dignity remains is long at stake.

[Author’s note: An abbreviate version of this column was initially published by Catholic News Agency on 6-23-2011.]

[CL Editor’s note: The Catholic Key (the diocesan paper there) gives a decent breakdown of events. The memo thatthe bishop did not ask to see is here.]