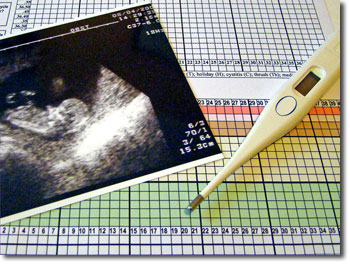 I wrote my senior thesis for the Catholic University honors program nearly 10 years ago. In my youthful zeal and eager for my own upcoming marriage, I tackled the prompt of “Nature and Technology” with a 35 page analysis of Humanae Vitae, Paul VI’s vision of human nature, nature and morality, and contraception as “technology.”

It probably needed either 700 pages, von Balthasar style, or two paragraphs, Catechism style. But it sure was fun.

At the reception following our senior defense, however, a young freshman (upstart!) cornered me. “That was really interesting, but I still just don’t see the difference between using NFP to prevent pregnancy and using condoms.”

He was right: At that point I had no good reason.

He was also not alone: How many of us have heard that, in order to be holy and love fully, we must completely submit our fertility to God and that NFP is merely another way of contracepting Him out of our beds? Isn’t timing our acts of intercourse simply setting up another barrier between each other?

However we live, we throw up barriers. Every human person holds fast to some aspect of his life and refuses to let God reign there. We all lock Him out of some room or corridor in our hearts. He offers us the abyss of love, and we want the shallows. Before we discuss whether or not NFP is inherently a barrier to God, we have to recognize that every created thing can become a barrier. These are the shadowlands.

Hans Urs von Balthasar wrote: ?“There is all the difference in the world between using one’s awareness of the periods of infertility and arrogating to oneself the right to impose radical restrictions on fertility by the use of artificial contraception.” That is, he claims there is a radical difference between using NFP and using a condom. Acknowledging that NFP can become a sort of “condom” in our hearts, we can nevertheless say with confidence that it is not “Catholic birth control.”

“For in using the infertile days they are not setting bounds to their love. Otherwise, one would have to say that intercourse in the full Christian sense is impossible after a woman’s menopause. Married persons who think as Christians set no barriers between the two objects of marriage: procreation and the expression of mutual love. They let the two stand together, the physical side, with its own proper laws, and the personal side. One’s awareness of the opportunities provided by nature does not mean one is imposing calculation on the inner spirit of love.”

That is, sex with a condom disregards the natural cycles of a woman’s fertility (and, I would add, the power of a man’s perpetual fertility). The condom sets a barrier (literally and spiritually) on procreation and the physical laws of our animal nature: the couple grasps at mutual love, mutual pleasure without acknowledging that in fact there can be no mutual love when we seek to escape our mutual responsibility to our fertility.

Using a woman’s infertile days as a time to express that mutual love, however, does not inherently involve the rejection of nature, physicality, and the integrity of the person (although, again, as human beings we are prone to misuse even NFP!).

The Church has not said that NFP is just fine in any circumstance or for every couple. We have a list of broad guidelines to bring to prayer as a couple, prayer with the Church, and the counsel of those we trust:

“If therefore there are well-grounded reasons for spacing births, arising from the physical or psychological condition of husband or wife, or from external circumstances, the Church teaches that married people may then take advantage of the natural cycles immanent in the reproductive system and engage in marital intercourse only during those times that are infertile…” ~Humanae Vitae, no. 16

Von Balthasar’s words only echo the words of Paul VI:

“[It is] lawful for married people to take advantage of the infertile period [and is]always unlawful the use of means which directly prevent conception, even when the reasons given for the later practice may appear to be upright and serious. In reality, these two cases are completely different. In the former the married couple rightly use a faculty provided them by nature. In the later they obstruct the natural development of the generative process. It cannot be denied that in each case the married couple, for acceptable reasons, are both perfectly clear in their intention to avoid children and wish to make sure that none will result. But it is equally true that it is exclusively in the former case that husband and wife are ready to abstain from intercourse during the fertile period as often as for reasonable motives the birth of another child is not desirable. And when the infertile period recurs, they use their married intimacy to express their mutual love and safeguard their fidelity toward one another. In doing this they certainly give proof of a true and authentic love.” ~HV, no. 16 (emphasis added)

Particularly striking in Humanae Vitae is the pope’s concern for the “reverence due to women” in particular and human love in general.

“Responsible men can become more deeply convinced of the truth of the doctrine laid down by the Church on this issue if they reflect on the consequences of methods and plans for artificial birth control. Let them first consider how easily this course of action could open wide the way for marital infidelity and a general lowering of moral standards. Not much experience is needed to be fully aware of human weakness and to understand that human beings—and especially the young, who are so exposed to temptation—need incentives to keep the moral law, and it is an evil thing to make it easy for them to break that law. Another effect that gives cause for alarm is that a man who grows accustomed to the use of contraceptive methods may forget the reverence due to a woman, and, disregarding her physical and emotional equilibrium, reduce her to being a mere instrument for the satisfaction of his own desires, no longer considering her as his partner whom he should surround with care and affection.”

Finally, though, all the explanation and clarity in the world are useless if the Church cannot honor and uphold the living example of men and women willing both to control birth by abstinence only and welcome with generosity the possibility of children when their circumstances allow. That is our mission: to be the men and women described by the pope and dear Hans.