Trending Now
You are at:Home»Featured»Obama’s Middle East Speech: So Balanced It Goes Nowhere
By Raymond Ibrahim on May 21, 2011 Featured, Government & Politics 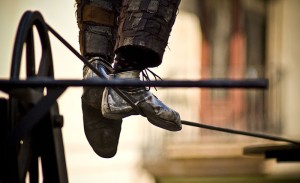 One of the problems with Obama’s Middle East speech was that parts of it were so deliberately balanced — so meant to appease all sides — that they go nowhere.

For example, look at the portions where he discusses democracy in the Middle East versus the alternative — Islamist rule, which he does not name.

One sentence seems to say that a “true” democracy is necessary, only to be followed by one that seems open to Islamist rule, and so on. Consider the following excerpts:

Not every country will follow our particular form of representative democracy, and there will be times when our short-term interests do not align perfectly with our long-term vision of the region.

This seems to say he’s open to Islamists’ having a prominent role now in the hopes that, in future, more liberal reforms will take place.

But we can — and will — speak out for a set of core principles — principles that have guided our response to the events over the past six months.

This implies the opposite: that Islamists can’t just have a blank check, as it were.

Such open discourse is important even if what is said does not square with our worldview. America respects the right of all peaceful and law-abiding voices to be heard, even if we disagree with them.

This is very open to Islamist rule, since many Islamists, such as the Muslim Brotherhood, are “peaceful and law-abiding,” at least until they assume power.

We look forward to working with all who embrace genuine and inclusive democracy.

This is another reverse implying that only “true” supporters of democracy are welcome.

What we will oppose is an attempt by any group to restrict the rights of others, and to hold power through coercion — not consent.

This is immensely vague: What if a group restricts the rights of its minorities — but with consent from the majority, as is the case when a majority of Muslims support Islamist/sharia rule?

In the end, however, when one moves beyond all the verbiage, it is clear where Obama is going with all this:

There must be no doubt that the United States of America welcomes change that advances self-determination and opportunity. Yes, there will be perils that accompany this moment of promise. But after decades of accepting the world as it is in the region, we have a chance to pursue the world as it should be.

In short, let’s take risks today in the hopes of achieving an earthly utopia tomorrow — a thing unprecedented in human history.