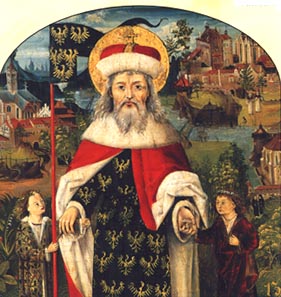 When I visited a fertility clinic for diagnostic tests a few years back, the place was packed to the gills. The nervous energy pulsed through the air as women considered investing their savings for treatments.

But this isn’t just another infertility story. This one includes a miracle from an obscure Medieval saint: St. Leopold of Austria.

I’m one of the unlucky women who has Poly-Cystic Ovarian Syndrome (PCOS), a leading cause of true infertility, rather than the “I waited so long to try that now it’s too late” variety. Women with PCOS recognize that they have a heightened chance of serial miscarriages if they are fortunate enough to get pregnant to begin with. The emotional distress can be as traumatic as the physical ailments that accompany this oft-misunderstood illness.

Even though I lived with PCOS worries for years, I was shocked when the doctor told me that I had only a 5-10% chance of conceiving. Really? That bad, huh? Truthfully, I was a little skeptical, but still…disturbed.

Something held me back from signing up for treatment. By the way, some avenues, like Clomid, are fine for Catholic PCOSers. Even so, the actual methods vary and the staffers I met seemed too busy marketing their success stats to care about moral concerns. The choices infertile couples have to make, by the way, are never easy. Catholic or not, ethical equations on a sheet of paper can never accurately reflect the raw emotion of real life scenarios that involve a deep yearning for a child.

Time went by, and I scheduled an appointment to follow up about my options, and also sent a prayer request to a priest who is a member of a community named in honor of St. Leopold. A month later, and a month before my appointment, I was pregnant!

Initially, I didn’t realize that the famous margrave (“marquis” in English) was behind the sought after miracle. St. Leopold is the patron saint of Austria and very little is written about him in the English language. He is patron of large families, death of children, and stepchildren. His family life explains his patronages. His first wife passed away at a young age and they had only one son together. His second wife, Agnes, lost her first husband after having 11 children. When the two widows married, they both became stepparents and formed a Medieval Brady Bunch. They had 18 children together, and tragically, lost seven.

A most virtuous ruler, Leopold was offered the role of Holy Roman Emperor and declined. This is perhaps the most impressive fact I have found about him. He was politically astute and ushered in an era of peace. A devout Catholic, he built monasteries and helped to resolve the Investiture Controversy.

Over the next year, I saw the Austrian saint’s fingerprints appear in my life. The puzzle pieces surrounding my baby’s entry into the world gradually sprinkled before me like fairy dust. While I was pregnant, the praying priest and I agreed to introduce more information about Leopold, who looks like Santa Claus in paintings, to English-speaking Catholics.

Once my son was born, I noticed some uncanny similarities between Leopold’s full name and the baptismal name we gave our son. As I researched the saint further, I learned that Leopold was documented to have helped someone have a child before. Albrecht, Habsburg duke of Austria, traveled to Leopold’s shrine to thank him for the birth of a son on November 15, 1339. This was 16 years prior to his formal canonization, which occurred after Rome uncovered an entire collection of miracles credited to Leopold.

Since Leopold’s life was dedicated to raising such a huge brood of children, it is natural that he would take a special interest in baby requests. If you or anyone you know is praying for a child, Leopold’s intercession can’t hurt! Now is the time to mark your calendar for a novena. Start praying on November 7th to end on November 15th, his feast day.