Trending Now
You are at:Home»Featured»On Steve Jobs, Roseanne Barr, and the Wall Street Mob
By Dr. Paul Kengor on October 7, 2011 Featured, The Economy 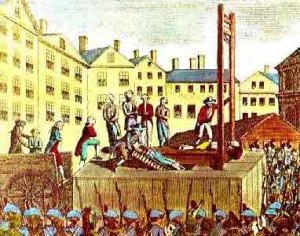 I got a double shock Thursday morning when I turned on my radio.

“Steve Jobs has passed away,” I heard a DJ remark. “That’s a shame.”

Yes, it is a shame. I was saddened to hear that.

I was equally shocked as I turned the dial and heard something even more deadly. It was a comment from actress/comedienne Roseanne Barr, literally calling for the death of certain wealthy Americans.

Joining her comrades in the “Occupy Wall Street” protest in Manhattan, the celebrity prattled on, pressing for a modern made-in-America version of Mao’s and Pol Pot’s re-education camps: “And if they are unable to live on that amount of that amount then they should, you know, go to the re-education camps and if that doesn’t help, then being beheaded.”

Roseanne’s Robespierre-like sentiments seemed especially cruel in light of the death of Steve Jobs. Consider: Jobs was worth billions of dollars. Would he be exempt from what the bloody French revolutionaries once termed the National Razor? Jobs was a not banker, but he was obscenely rich, which, truth be told, is the ultimate sin in the minds of Roseanne and the zealots.

Sure, sure. I hear the criticism: Come on, Kengor, Roseanne Barr is a crackpot.

Well, indeed, that’s apparently the case. But Roseanne’s rant against the rich seems a fitting apotheosis to the anarchical madness on display on Wall Street and elsewhere by the “Days of Rage” gang.

To be sure, I doubt the marchers would be willing to escort American bankers to the chopping block. That said, they and Roseanne share some crucial, unifying commonalities. First and foremost, they are united by an utter, unhealthy contempt for wealthy people, and would be happy to take as much money from the wealthy as humanly possible. Moreover, en masse, they demonize a faceless enemy. “The rich” is a handy caricature for whatever assortment of injustices these people believe ails them.

And that brings me back to Steve Jobs.

There is something comically ludicrous about a throng of ranting, raving, raging college kids slurping Starbucks and staring into I-phones while angrily protesting the very system that made it all possible in the first place. Even the mob’s ability to turn out the mob is made possible by this system. The children are spurning the mother that gave them birth.

Well, Steve Jobs existed. As co-founder and CEO of Apple, he changed the world for the better. The Wall Street “occupiers” are exploiting the technology that he helped create.

What the Wall Street horde and Roseanne do not understand is that in America people generally get rich by providing a product or service that people want. Sure, there are exceptions. Some get wealthy by promulgating vice instead of virtue—witness the porn industry’s parasitical attachment to Jobs’ technology industry. Some are rich because they inherited the money—witness the Kennedy family. By and large, however, “the rich” earn their riches through the consent of millions of citizens who voluntarily purchase products and service through their own free will. That is called the free market; it is the opposite of the command economy.

The failure of young people to know the difference is yet another failure of this nation’s horrendous educational system, and especially our bankrupt universities—bankrupt, that is, morally, certainly not financially. The universities that have mis-educated the mob charge far higher fees than any Bank of America ATM.

Roseanne and the mob do not understand this country and its market system. Neither is perfect, nor are the wealthy people they produce. You are, however, free here—and free to keep the wealth you earn.

Steve Jobs understood. May he rest in peace.