Trending Now
You are at:Home»Featured»Optimism in Egypt Over Building Churches
By ACN-USA News on June 22, 2011 Featured, Those in Need

Obtaining permission to build new churches in Egypt could become almost as easy as constructing mosques, according to new government proposals which have won the backing of leading clergy.

The plan, now in public consultation, proposes to do away with the existing laws whereby church-building plans require permission from the president himself.

Instead, such proposals would go before the regional governor for a decision within three months.

Until now, decisions over applications for new churches have sometimes been delayed for many years, even decades.

In an interview with Catholic charity Aid to the Church in Need (ACN), Bishop William said that already the government were showing signs of easing restrictions on church-building.

He said that permission to build two churches in his diocese in Upper Egypt had come through before the January 25th Revolution which climaxed with Mubarak’s departure from office.

Applications for another three churches have been approved in the last few weeks, leaving just one outstanding, with a decision expected soon.

Bishop William said the proposals, which the government could decide upon within a matter of weeks, marked a crucial step forward for the 10 million Christians in Egypt, where tight restrictions on Church-building are frequently cited as one of the most serious forms of anti-Christian oppression. 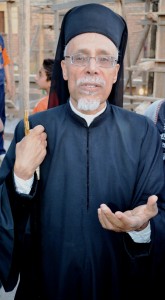 He said, “If these proposals come into law, it could mean that building churches will be almost on the same level as constructing mosques. It is a major step forward for the citizenship of Christians.”

“What we are seeing here is one of the first fruits of the demonstrations back in January. When the Christians demonstrated, they asked for their rights, and the first right they demanded was the construction of churches.”

“Everybody knows that this has been a big problem for the Christians. Many moderate people have recognized it.”

“In fact more than 50 percent of the problems Christians face will be resolved if we can make progress on this issue.”

As a Catholic charity for persecuted and other suffering Christians, Aid to the Church in Need has given key support for building parish centers, presbyteries, parish halls and other Church structures, supporting plans even in the face of government resistance.

But the proposals are controversial for hard-line conservative Islamists, including Salafists and the Muslim Brotherhood, the Islamist political movement now liberated after decades of tight control under President Mubarak.

The extremists’ action against increased tolerance for Christians climaxed on May 7th, when they attacked three Coptic Orthodox churches in the Imbaba suburb of Cairo, where 15 people died and more than 230 were injured.

Bishop William said that despite initial progress, Islamists were now losing support in the run-up to all-important parliamentary and presidential elections in the autumn.

He said that a number of governors – including the one for Assiut – were so far open to Christians and resistant to extremists’ demands to shift the country towards an Islamic theocracy.

The bishop said, “Of course the Salafist continue to interfere, but their campaign of slander cannot get the support of moderate Muslims who do not accept their complaints against Christians.”

“We hold inter-faith meetings during which speeches are presented by religious representatives. These presentations are intended to promote mutual respect and cooperation.”