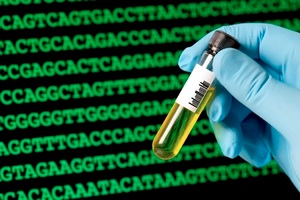 While the country breathlessly waits for the Supreme Court to decide on Obamacare, there is another court battle to keep an eye on.  This battle may not be as critical as the one on our health care system, but it is still important for the health of anyone with DNA.

For decades the U.S. Patent Office has been issuing patents for naturally occurring genes. Most people are not aware that about 25% of all human genes are patented.  This means that a company or university owns the genetic code that makes up that gene.  They own the sequence of genes that you have and use in your body everyday and once your DNA is isolated from your body, they “own” your genes.

Gene patenting affects you directly, whether you know it or not.  Because a company legal “owns” a gene sequence, they control who is able to test or research that gene.  In the case of genetic testing, labs are limited on what genes they can offer tests for because of gene patents, which limits the choices they can offer patients. Labs that are allowed to test a patented gene pay royalties to the companies that own the genes which drives up the cost of the genetic test.  Many labs, like ones I have worked in, just chose not to offer the test at all.

These patents also allow companies to hold patents on genes and not do research on those genes. They can also not allow others to do research either.  And because so many diseases have a genetic component, gene patents tie the hands of researchers who want to look at genetic links to disease.  As Dr. Iris Schrijver, president of the Association for Molecular Pathology, which is against the issuing of gene patents, observed:

Because variation in gene sequences plays an important role in the development and progression of many diseases, through gene patents patent holders can essentially gain ownership of the understanding of some diseases and of certain areas of patient care itself.

In the case of some genes like the breast cancer genes BRCA I and BRCA II, one company, Myriad, owns the gene and only Myriad offers the test for variations that signal a high risk of breast or ovarian cancer.  This means that if a patient wants a second test run by another company to confirm the test result and test interpretation before they have radical surgery, they are out of luck.  In addition, many women who fear that they are at risk simply cannot afford the $3000 test that could give them the information to save their life.  And because of gene patents, they cannot go anywhere else.

To put a human face on gene patents, I once got a call from a frantic father whose daughter was diagnosed with Long QT, a rare and serious genetic heart condition.  He and his wife were faced with putting their 4 year-old little girl on serious medication and fitting her with a pace maker because of the genetic testing results showed she had a rare genetic mutation for Long QT.  Something about the lab that gave them their results did not sit right with them.  Before initiating the invasive procedures on their daughter, they wanted a second opinion.  The could not get one without traveling overseas because only one lab in the United States owned the patent for the gene and only they offered the test.

The ACLU and the Association for Molecular Pathology have sued Myriad Genetics and the U.S. Patent Office over Myriad’s patent on the BRCA I and II genes.  The initial ruling, issued by Judge Sweet, was that DNA isolated from its natural environment cannot be patented because it is a product of nature which is accordance with patent law.

Of course Myriad appealed the ruling.  Then a higher court that deals with patent cases overturned Judge Sweet’s ruling saying that DNA isolated from the body to be tested was remarkably different that the DNA found in the body.  I found this decision ludicrous.  I have isolated DNA from thousands of patients and never once did I think it didn’t contain the same information as DNA inside their bodies.  If I did think that isolated DNA was so different from DNA inside the body that it was a patentable invention, I wouldn’t bother testing it.

This case then went to the Supreme Court.  The Supreme Court has rightfully overturned the stupid decision that human DNA outside the body was remarkably different than inside the body and sent the case back down to the lower court to be reconsidered.  The high Court cited another ruling that they made earlier that laws of nature are unpatentable.

This is good news.  One step closer to making the patenting of our genes invalid. Now let’s hope that the lower court gets the decision right this time.

Why should we care?  I believe that patenting naturally occurring gene sequences is not simply a legal issue, but a moral issue.  The patenting of genes allows what I believe to be an unethical practice: the systematic claim of ownership of the human body.  You own your DNA while it is in your body, but if someone extracts it and identifies the purpose of it, they now own it. Even though it is still your DNA from your body.  This naturally reduces the human body to pieces that can be bought and sold.

It is hard to find official Church teaching on gene patents, but I did find this quote from John Paul II in an address to the Pontifical Academy of Sciences:

The ability to establish the genetic map should not lead to reducing the subject to his genetic inheritance and to the alterations that can be made to it. In his mystery, man goes beyond the sum of his biological characteristics. He is a fundamental unit, in which the biological cannot be separated from the spiritual, family and social dimensions without incurring the serious risk of suppressing the person’s very nature and making him a mere object of analysis….

On this subject, we rejoice that numerous researchers have refused to allow discoveries made about the genome to be patented. Since the human body is not an object that can be disposed of at will, the results of research should be made available to the whole scientific community and cannot be the property of a small group.