Trending Now
You are at:Home»Featured»Pakistan: Christians Suffer Discrimination in Prisons
By ACN-USA News on November 16, 2011 Featured, MyChurchParish.com, Those in Need 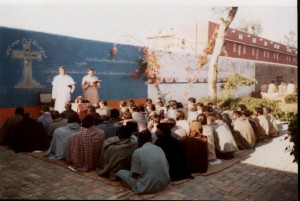 Christian prisoners in Pakistan’s jails are suffering severe discrimination, according to a local Catholic lawyer.

Moazzam Aslam Bhatti reported his claims of anti-Christian prejudice to staff from Aid to the Church in Need (ACN), who are currently visiting projects which the Catholic charity is supporting in the country.

Mr. Bhatti said that Christians are marginalized and disadvantaged throughout Pakistani society, but the situation in prisons is “particularly precarious.”

He said, “Christians are disadvantaged in the distribution of food, clothing and medicines, as well as in their ability to practice their religion.”

“This situation must change.”

Mr. Bhatti also told ACN that most Christians who are charged have no lawyer because of their poverty and low social position.

He called for increased legal aid to be provided in order to improve the situation.

Highlighting the poverty that afflicts many Christians he said, “It is alarming to note that many people jailed for minor offences could have been released if they had been able to pay the fines imposed on them.”

“Those affected also include children who are compelled to stay in prison together with their mothers.”

According to the Dominican Father Iftikhar Moon, who is in charge of prisoners’ pastoral care in the Diocese of Faisalabad, the city of Faisalabad has a prison population of 5,000 in which between 85 and 100 inmates are Christians.

Those in jail in the city include shopkeeper Imran Masih who was sentenced to life imprisonment in January 2010 under the country’s Blasphemy Laws for allegedly burning pages of the Qur’an.

Mr. Bhatti studied in England before returning to Pakistan to work with the disadvantaged.

He told ACN, “Despite receiving good job offers abroad, I returned to Pakistan in order to do whatever is in my power to help the people.”

Although he said he can do little to change the situation, he added, “I am proud to be able to do something for the people in this part of the world where Christians are oppressed and pushed to the margins.”