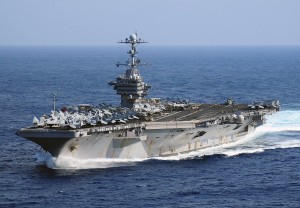 Suddenly, it seems, President Obama is all about the Pacific. As he put it at a weekend summit of the region’s leaders in Hawaii, “The United States is a Pacific power and we are here to stay.” Unfortunately, thus far in his presidency, Mr. Obama has caused many of his guests to see America as less and less of a power and prompted them to have serious doubts about our willingness to stay in a strategically significant way.

Such perceptions have been greatly aggravated by the dynamic that has characterized the Pacific in recent years: the increasing emergence of Communist China as an economic and military hegemonist while the United States appears to be poorly led, in decline economically and in retreat militarily.

Friends and adversaries alike have responded to such perceived changes in the geopolitics of the Pacific and its vast periphery. America’s formal or de facto allies there — a group that has of late come to include a few unlikely nations like Vietnam — are panicking at the prospect that this country will be neither willing nor able to serve as a bulwark against Chinese imperialism.

Meanwhile, current or prospective adversaries in the Pacific littoral, including not only China but Russia and North Korea, are being emboldened by what they see as declining U.S. power and a vacuum ripe for them to fill. This has led, among other undesirable developments, to: assertions by the PRC of complete sovereignty over the international waters of the South China Sea; new demands from Russia’s once-and-future president Vladimir Putin opposing American missile defenses; and intensifying nuclear proliferation by North Korea.

In what we are being encouraged to believe is a serious (if belated) effort to counter doubts about America’s commitment to and engagement with the Pacific, Mr. Obama is launching new economic and security undertakings with respect to the region:

On the economic front, Mr. Obama formalized over the weekend an agreement with a number of other nations on the outlines of a new multilateral “Trans-Pacific Partnership.” This arrangement employs certain criteria, such as the extent of state-ownership in the national economy, to exclude China, at least for the time being.

Welcome as this initiative appears to be, it is troubling that Team Obama is putting out the word that another year may be required to flesh out the details. That would put a potential domestic political liability for the president’s union base safely on the other side of next fall’s election in the United States. Obviously, until then, the value of such a free-market-based response to China will be, at best, more symbolic than real.

With respect to the military side, the Obama administration let it be known shortly before the president embarked on his present excursion that the United States is going to ramp up dramatically its ability to counter Chinese power-projection in the region. That will include a new U.S. base in Australia.

As The WashingtonTimes reported last week, administration officials are backgrounding the press that this “Air-Sea Battle” initiative marks the beginning of what the paper’s national security editor, Bill Gertz, has described as a “Cold War-style approach to China.” Necessary and again welcome as this posture would be, much of what will be required to realize such an ambitious undertaking is, at the moment like the Trans-Pacific Partnership, still on the drawing boards.

Worse yet, if those in Congress who are determined to make further, draconian cuts in defense spending have their way, the capabilities required to counter China’s actual and incipient “area-denial,” “anti-access” and other asymmetric threats may never materialize. And, in such a budgetary environment, even if the beefing up of America’s presence in the Pacific does materialize, it will require us to leave uncovered other trouble spots around the globe.

Such an outcome is especially predictable if President Obama — after saying he would not accept cuts beyond the $465-plus billion he has already directed be made in defense accounts —carries through on his latest threat: To veto any legislation that tries to spare the Pentagon accounts the $600 billion more in devastating automatic, across-the-board reductions in the event the supercommittee cannot fashion an alternative deal.

In short, the sorts of steps Mr. Obama and his administration are proposing seem to be both in order and long-overdue. Sadly, trans-Pacific efforts explicitly designed to strengthen the region against Chinese economic hegemonism and ramp up U.S. and allied capabilities to contend with the PRC’s growing capacity (and will) to assert itself militarily might not have been necessary. We could have been spared the expense and difficulties associated if America had practiced in recent years what Ronald Reagan called “peace through strength,” rather than hoped-for peace despite our irresolution and perceived weakness.

The question his track record surely is raising in the minds of many in the not-so-pacific Pacific these days is: Does Barack Obama mean it this time? Or will we simply be seeing a bit more of his trademark “hope and change” – long on false hope and short on the change we need to protect our interests and allies, both in the Asian-Pacific region and elsewhere around this ever-more-dangerous world?