Trending Now
You are at:Home»Featured»Peeling Back the Onion Layers: Gravitational Waves Detected!
By Bob Kurland on February 16, 2016 Featured, Science 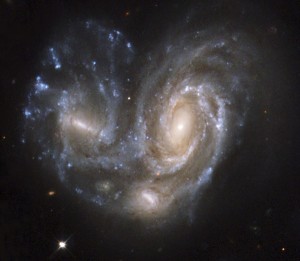 Many of you have read about the recent experimental detection of a gravity waves by LIGO (Laser Interferometer Gravitational-Wave Observatory), another jewel-in-the-crown of empirical confirmations of Einstein’s General Relativity theory. And it came, appropriately, on the 100th anniversary of the publication of that theory.

I’m not going to expound on the science of this fine piece of experimental work or try to give a “horsies-and-duckies” explanation–that’s very well done in the linked publication and in a fine post by Matt Briggs, Gravitational Waves and Discovering Cause, and comments thereto. Rather, I’m going to use this as an excuse for expounding on what I believe science is all about.

In these arguments, I’ll rely on my own 52 years experience as a practicing chemical physicist (or in other environments, biophysicist, medical physicist and even — horrors! — physical chemist).

What Philosophers Say Science is All About*

There are two principal schools of the philosophy of science: scientific realism and scientific anti-realism (or scientific empiricism). The realism school holds that what sciences tells about the universe mirrors an underlying reality.  I’ve discussed the anti-realism school in another article,  “Tipping the Sacred Cow of Science“, in which I discuss Nancy Cartwright’s book, How the Laws of Physics Lie and the work of Bas van Fraassen.

These philosophers hold that scientific theories do not mirror reality, but are rules used to “save the appearances”, i.e. to give mathematical descriptions useful for prediction, as in the use of Ptolemaic epicycle to predict planetary motions in the sky; to put it another way, science is “descriptive” not “prescriptive”.

The only scheme I’ve found that represents reasonably well how science works is that given by Imre Lakatos, the scientific research program which scheme has also been adapted for other disciplines, e.g. theology, economics. The scheme can be viewed as a hard core of accepted principles (e.g. the Galilean Principle of Relativity that the laws of motion are the same in all inertial frames, or the Second Law of Thermodynamics), surrounded by a layer of theories that confirm or in accord with the core principles and an outer layer of experimental tests confirming or rejecting the outer layer theories.

The theories and auxiliary data in the protective layer are networked to each other and to the core. For example, the relativistic formulation of black hole growth and radiation is linked to the Second Law of Thermodynamics and to quantum mechanics. (For an interesting view of the Lakatos scheme in other disciplines, do a Google search “images Lakatos scientific research programme”.)

The Lakatos scientific research program does show how science works, but as far as I can see, it does not lay claim to either scientific realism or anti-realism–it’s epistemic, not metaphysical.

What I Think Science is All About**

My view of science is based on much post-retirement reading in the philosophy of science and on my work from 1954 to 1997 in spectoscopy, nmr and MRI–studies crossing several disciplines–chemical physics, biophysics, molecular biology, medical physics. In the ** Note I’ve given an illustration from my research life of how science works (or should work), but here I’d like to focus on a prime example — the development of the Standard Model for elementary particle physics.

In a previous article (15th April, 2013), God. Symmetry and Beauty I: the Standard Model and the Higgs Boson, I discussed the development of this theory. I’ll summarize here the points relevant to the modus operandi of science and show how they are in accord with the Lakatos model.

First,  in the Lakatos outer shell there were experimental findings that did not fit well into any established theory, what was termed the “elementary particle zoo“. Second, two principles in the inner core governed what theories would be acceptable and esthetically satisfying: symmetry and gauge invariance.

An auxiliary theory proposed early on by Higgs, utilizing an auxiliary principle of “symmetry breaking”, was developed to enable gauge-invariant theories to be employed and yield mass values for elementary particles. Some other theories were developed that made predictions that were falsified and so were discarded.

The final icing on the cake was the  detection of the Higgs boson by very high energy scattering experiments, thus completing the experimental verification of the Standard Model theory.

Gravitational Wave Data, from Caltech Media Assets LIGO is another example of Super Science, massive experimental enterprises designed to test/confirm fundamental theory, as in the CERN experiments for detecting the Higgs boson. Did it do so? Weren’t all the other experimental confirmations, listed below, of Einstein’s General Relativity theory sufficient?

the gravitational deflection of light, the perihelion shift of the orbit of Mercury, the gravitational red shift, the frame-dragging effects of Gravity Probe B, and the rate of gravitational-wave energy loss from neutron-star binary pulsars. (John G. Cramer, Gravity with 4-Vector Potentials.)

The answer to that question is no. Another theory, G4V (Gravity with 4-Vector Potentials–see link above), has been proposed. For the properties listed in the quotation above, the G4V theory gives predictions identical to those of Einstein’s General Relativity theory.  They differ in the predicted properties of gravity waves by differing in the predicted wave polarizations***.

At the time when this article was written it appears that the observed waves correspond to the Einstein GR predictions. Thus  the experiments will have fulfilled their mission, to decide which theory fits reality better, Einstein’s or the G4V.

Since I have a blog called “Reflections of a Catholic Scientist”, I should say something about what this means to me, in terms of my faith.

I believe there is an underlying reality revealed partially by science, that as one peals back the layers of the onion, we get closer to the core. I also believe, along with Bernard d’Espagnat, that we will never know altogether what that core is.

I believe that we will not know that, because the core is God, the Holy Trinity, and God is only known by what he is not. He cannot be comprehended in His Entirety.

I also believe that God has given us insight to use science to perceive with wonder His Creation. In the words of Psalm 19a “The heavens declare the glory of God; and the firmament sheweth his handwork.”

What benefactor has enabled you to look out upon the beauty of the sky, the sun in its course, the circle of the moon, the countless number of stars, with the harmony and order that are theirs, like the music of a harp? (St. Gregory of Nazarian, Sermon as quoted in The Office of Readings for 15th February, 2016.)

*There have been many books and articles written about the philosophy of science.   Some of these contain useful and/or interesting stuff.   Unfortunately many of these philosophers have not done science, and this lack of experience shows in their philosophic work.   I can think of only three who have written both philosophic and scientific papers:  Fr. Stanley Jaki, Michael Polyani and Bernard d’Espagnat, all of whom I admire (for different reasons).

**I want also to illustrate how science works with an example from my own scientific career. So as not to blow my own horn (too much!), I’m going to try to show not only where I succeeded, but where I erred.

A few years into my first academic position at Carnegie Tech (now Carnegie-Mellon University) a graduate student in my research group was facing a road block with his research problem. A well-established theory was not giving results matching his data. After a lot of thought, it appeared that the gap lay in that higher energy levels of the compound (potassium ferricyanide) he was studying. Searching the library, I found a publication by Schwinger and Karplus (recalling my earlier graduate course in quantum mechanics) that offered a road to a solution. After several weeks of intensive devotion I wrote a paper that incorporated  density matrix techniques to account for contributions of all electronic levels and submitted it for a publication. One reviewer pointed out a serious deficiency–I had neglected to account for mixing of excited states with ground state. I acknowledged he was right, asked him to co-author the paper with me and we collaboratively worked it up for publication. There is an equation stemming from that work, (Google “Kurland-McGarvey Equation”) that is widely enough used in the specialty that it doesn’t need footnoting for reference. So one more small brick in the scientific edifice.

****For some neat videos and pictures, go to the LIGO Lab Gallery.