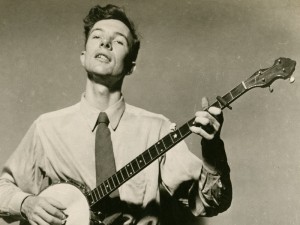 Pete Seeger’s death at age 94 is a cultural catharsis for the American left. The New York Times accorded his passing the kind of space normally reserved for the death of a president. Such was Seeger’s special place of reverence among liberals.

The media is hailing Seeger as a “social-justice” crusading “progressive,” a voice for the poor, the downtrodden, the working man, and the environment. He’s also being portrayed as a victim of wild-eyed McCarthyites who maniacally searched for a red under every bed.

Well, the full story is a little different.

Pete Seeger had in fact been a Marxist, a committed one who stumped for international communism at the height of the Stalin era. Interviewed in 2008 for the PBS series, “American Masters,” Seeger conceded those sympathies. He first joined the Young Communist League at Harvard (mid-1930s) and later (early 1940s) joined Communist Party USA (CPUSA).

That latter fact is a halting one. Many American communists, especially Jewish communists, bolted from CPUSA when their beloved Joseph Stalin allied with Hitler, specifically via the August 1939 Hitler-Stalin Pact. Not Seeger. He was undeterred, joining the party after the pact. (For the record, likewise undeterred was Barack Obama’s mentor, Frank Marshall Davis, who also joined CPUSA after the pact.)

Seeger was a loyal comrade. If you were a communist agitator/organizer staging a big display or furthering the revolution, Pete Seeger’s presence was as reliable as a red flag. He was guaranteed to provide musical entertainment for the cause.

Here are a few examples:

At the massive anti-Vietnam rally held in New York City in April 1967, organized by the radical New Mobe, Seeger was there, strumming for the faithful.

In the 1950s, New York communist parents sent their red-diaper babies to the Little Red School House, founded in the 1920s by “progressives.” There, the likes of Angela Davis, Victor Navasky, the sons of Julius and Ethel Rosenberg, and future Weather Underground terrorist Kathy Boudin (still in jail for murder) sat at the knee of leftist celebrities like Seeger, who played and taught music there.

Seeger also provided rousing performances at the summer “commie camps” in the Catskills where the New York faithful sent their children to study the gospel according to Marx. These surreal spectacles were a sort of twisted red version of Vacation Bible School.

But Seeger’s most disturbing work as a Marxist minstrel was his crooning for “The Almanacs,” which historian Ron Radosh—himself a former red-diaper baby—calls a “communist folk-singing group.” At varying times, “The Almanacs” included Seeger, Woody Guthrie, Burl Ives, and Will Geer, later known as “Grandpa” on TV’s “The Waltons.” Seeger founded the group in 1941.

The most egregious work by “The Almanacs” was its propaganda for the insidious American Peace Mobilization, which Congress identified as “one of the most seditious organizations which ever operated in the United States” and “one of the most notorious and blatantly communist fronts ever organized.” Founded in 1940, the objective of the American Peace Mobilization was to keep America out of the war against Hitler. This also meant no Lend-Lease money to Britain.

Why did the American Peace Mobilization take such a position? It did so because Hitler signed an alliance with Stalin. For American communists, any friend of Stalin was a friend of theirs. They literally swore an oath, formally pledging to a “Soviet America” and to “the triumph of Soviet power in the United States.” They were unflinchingly devout Soviet patriots.

In my book Dupes, I publish the declassified Soviet Comintern document detailing how the American Peace Mobilization “was organised on the initiative of our Party in Chicago in September, 1940.” (Obama’s mentor, Frank Marshall Davis, was there.)

As for mobilizing the “peace,” eager Pete Seeger was there to salute the flag.

The kick-off rally to attract naïve recruits (i.e., liberal dupes) to the American Peace Mobilization was a huge April 1941 promotional in New York. The featured musical talent was Stalinist Paul Robeson and “The Almanacs.” Almost every “folk ballad” was a swipe at America and FDR—who communists were attacking at that point—for supporting an “unjust war” by aiding Britain as it was besieged by the Nazis’ ferocious onslaught.

Such was the position of American communists, like Pete Seeger.

Of course, liberals should be enraged at Seeger for efforts like this. Unfortunately, they don’t understand their own history. For them, the bad guys are never on the left. As ex-communist James Burnham used to say, for the left, the preferred enemy is always to the right.

Speaking of which, in the left’s perverse moral universe, I’ll be viewed as the bad guy for pointing out these sordid facts about Pete Seeger. I’ll be pitied for my crass McCarthyism, whereas Seeger will be forever lionized by liberals as a peace-loving lamb, a happy-hearted hippie unfairly persecuted for his mere pursuit of “social justice.”

[Editor’s note: A shorter version of this article first appeared in the Pittsburgh Tribune-Review. For information on the New Mobe, see Wikipedia.]