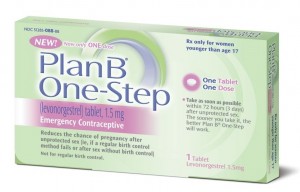 A few days ago the FDA announced its decision to lower the age for access to over-the-counter emergency birth control from 17 to 15. It used to be that if minors needed speed-dial abortions they would have to see a doctor for a prescription. Since most minors can’t get to the doctor without a parent being directly involved,  the FDA fixed that by making the drug available over the counter.

I take issue with this for two reasons. Number one: Plan B One-Step® has been lying to women about how it works exactly. They claim to be a contraceptive and attempt to differentiate themselves from the RU486 pill when, in fact, Plan B is also an abortifacient. Number Two: I have a real problem with the government giving drug companies a green light to target my kids by getting around me, the parent.

There is an agenda here. I call it the “Planned Parenthood Mentality”.  It’s an underlying current of thought that tells kids they can’t trust their parents enough to talk to them about a crisis or important life changing decisions.

The message is this: Parents are too volatile and too emotionally involved in their child’s life to be of any use in an emergency like pregnancy. If they found out, they would know you were having sex. They would probably  fly off the handle or act irrationally or abuse or kick a pregnant daughter out on the street. No, teens need an objective third party that will look out for their best interest.

That’s right. Planned Parenthood or the FDA or (fill in the blank) get to play the role of the cool hip adult-alternative who a teen can go to in a pinch. They don’t tattle because they understand. They won’t lecture you or tell you you shouldn’t be having sex. They are like a friend’s cool relative who will run into the grocery store to buy a pack of smokes for underage teens or a college student who will make a beer run for the high school kids.

People who seek to reach our children by circumventing us never have good intentions. When PP president Cecile Richards recently decreed the injustice of putting obstacles between women (minors) and access to emergency contraception what she really meant was that she doesn’t like obstacles between your children and her own pockets. Children are not wise consumers and are not fully mature enough to make major life choices on their own. Planned Parenthood knows this. The FDA knows this. Their bottom line is not your kid’s well being, trust me!

Let’s face it, this pill was created for the person who acts first and thinks later. Teenagers do that. Just like handing out condoms was proven completely ineffective because it gave people a false sense of security, this morning after pill will be no different. Kids will think it’s a foolproof method and it will fail.  In fact, Since Plan B became available OTC in 2001 in the UK abortion rates have soared. Planned Parenthood loves nothing more than desperate pregnant women. They are giant walking dollar signs.

My other issue with Plan B One-Step® is their deliberately deceptive phrasing on the labels. They insist that they are not an abortifiacient but rather a contraceptive. Sorry, but this is just wishful thinking.

This is their own wording:

Plan B One-Step® is one pill that has a higher dose of levonorgestrel, a hormone found in many birth control pills that health care professionals have been prescribing for several decades. Plan B One-Step®works in a similar way to help prevent pregnancy from happening. It works mainly by stopping the release of an egg from the ovary. It is possible that Plan B One-Step® may also work by preventing fertilization of an egg (the uniting of the sperm with the egg) or by preventing attachment (implantation) to the uterus (womb).

Let’s dissect this shall we?

The claim starts by reassuring the buyer that its product is simply a higher dose of the same hormones that doctors have been prescribing for years. I won’t even go into the number of birth control related deaths this past year! (Thepillkills.org)

Then it states that Plan B works in a similar way to help prevent pregnancy from happening by stopping the release of the egg from the ovary.

That statement is counter intuitive. That would only work for girls who haven’t yet ovulated but what about girls who are buying this product as an emergency solution precisely because they suspect they may have already ovulated and introduced sperm to their ovum creating a little embryo?  I mean, isn’t that the whole point of having a plan B to begin with? Who are they kidding?

“It is possible that Plan B One-Step® may also work by preventing fertilization of an egg (the uniting of the sperm with the egg) OR by preventing attachment (implantation) to the uterus (womb).”

That’s their loophole right there. They won’t promise you one or the other. It’s a gamble.

Of course, if you haven’t ovulated already you won’t. But guess what, ladies? If you have already conceived the only thing it can promise is to prevent that little person from getting too comfortable in the lining of the womb by rejecting him/her.

You see, the drug companies are shrewd and they define pregnancy not as conception (the meeting of sperm and egg) but as the moment an embryo implants in the walls of the uterus. If they can prevent implantation- they have technically prevented a pregnancy but they have not prevented a life.

Incidentally, the same goes for all types of  hormone birth control pills, or rings or patches or IUDS on the market. They are all simply potential mini abortions. Don’t kid yourself if you think they’re not. Read the labels. You will find that at the very end of each description on how these products work you will find elusive phrasing about how it “prevents pregnancy” by preventing implantation.

If drug companies can’t be straightforward with customers and  can invent their own definitions of pregnancy why should they have direct access to my child- a more vulnerable and less discerning consumer? Even adults have been fooled by their wording for years! Neither the FDA nor drug companies or anybody has any business selling dangerous amounts of hormones to my child especially without my express permission or supervision.

And as for Cecile Richards and Planned Parenthood, they are despicable and transparent. Planned Parenthood is pro choice when it comes to THEIR choice and their bottom line. They don’t care about a parent’s choice or a voice at all! They seek to take advantage of children with no regard for their health or safety. They are indeed predators.