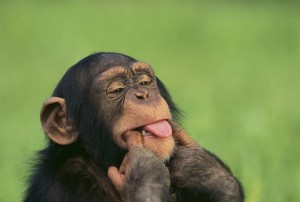 It is now safer to be a monkey in Spain—at least if you’re one of the larger species—than a man. Thanks to a new law passed by the Spanish parliament and signed into law by Prime Minister Mariano Rajoy, the Great Apes are protected from the moment of conception against abortion and fetal experimentation. Human embryos, on the other hand, remain unprotected and the subject of scientific research.

This is why a group of gorillas gathered around the headquarters of the ruling political party, the Partido Popular, last week. They were there to celebrate their historic legal and political victory, and to ask why human babies were still being denied the same protections.

One of the gorillas (who had apparently mastered human speech), decried the hypocrisy of granting them the right to life while denying the same protection to Homo Sapiens. “The government is deaf to the voice of millions of Spanish who already asked to repeal the abortion law,” he proclaimed, thumping his chest. “But perhaps Rajoy is more responsive to the call of the wild.”

While the assembly of gorillas cavorted about in ape-like fashion, screeching and scratching, the gorilla leader explained that they had come out to urge “Rajoy to fulfill his campaign’s promise to protect human life from conception and to support motherhood and family.” He concluded that “There is nothing more savage and inhuman than abortion.”

Of course the demonstrators weren’t really gorillas, but pro-life activists from Spain’s Asociación Derecho a Vivir (in English, the Right to Life Association).

Ignacio Arsuaga, president of the Association, urged President Rajoy to fulfill his campaign promises and overturn the abortion law passed by his Socialist predecessor. Arsuaga noted that “It just doesn’t make any sense that the law protect the lives of several animal species and yet does not apply to human beings.”

Protecting human life from conception would have the support of the majority of Spain’s population, Arsuaga went on, pointing out that over 400,000 Spaniards had already signed a petition demanding the repeal of the abortion law. “Because of this law 300 unborn babies die violent deaths every day in Spain—more than a hundred thousand a year—and that is something that a democratic society cannot afford,” Arsuaga said.

Spanish Minister of Justice Alberto Ruiz-Gallardón has promised to present an abolition of abortion bill before the end of March. “We and millions of Spanish people are asking that these promises be fulfilled,” Arsuga added.

We at PRI are proud to support our friends at the Asociación Derecho a Vivir (as well as the gorillas who joined them!) In fact, we are working to persuade a number of Latin American leaders to take a similar step.

We have no objection to protecting the lives of endangered primate species, as long as human lives are protected as well.