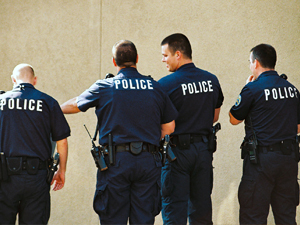 America is not a police state. This is not a country in which the arm of justice is empowered to pursue arbitrary and selfish goals. Instead, America is a land of laws that restrict harm, damage, selfishness, and the arbitrary use of force by police as well as citizens. Power in America is not absolute because it is restricted by law. Yes, the arm of the law is long, but in very predictable ways.

In my role as father, I was expected to exert my authority in the training and education of my boys, increasing the likelihood that they would become contributing members of society. I was accountable to local authorities who had the responsibility to ensure that my parenting did not become neglectful or abusive.

In my role as church treasurer, I am expected to handle the church money, being certain that every penny contributed to the church is used to support the ministries of the church and our church’s Christian mission. I am accountable to the church session which reviews monthly reports and to the other members of the financial committee as we constantly look over each other’s shoulders and make sure no one has the opportunity to hide or personally use church assets. Independent auditors and governmental regulations provide additional layers of accountability.

In my role as college administrator, I am expected to fulfill my obligations in a manner that is consistent with the mission of the college and the accreditation standards of the regional accrediting body. The oversight by the vice presidents and the accreditor hold me accountable for the manner in which I exercise my authority as I work with students and faculty.

In my role as a citizen, in my relationships with various municipal authorities and other citizens, I am to conduct myself in a manner consistent with my God-given and legal rights. Moreover, I must not use my power as an American citizen to violate the rights of others.

Indeed, it is the proper application of accountability that limits power, ensuring that power is not used in an abusive or improper fashion. When the accountability systems indicate that harm has been done, they take appropriate steps to restore the balance of power.

There have been some questions in the minds of Americans as to whether recent grand jury decisions have properly held police officers accountable for their use of force. In particular, in the Eric Garner case, there appear to be many unanswered questions about the grand jury’s decision. The public has seen the video tape, which suggests that the officers went too far in the way they handled Eric Garner. Not having seen or heard the other evidence presented to the grand jury, I am not able to make a fully informed evaluation, but I clearly understand the angst that exists.

It is imperative that our society finds appropriate ways to empower and facilitate the dangerous work of police officers, while at the same time holding them accountable for the manner in which they use their authority and power. Body cameras have been suggested as one tool that might contribute to this delicate balance. That possibility is certainly a discussion worth having. We must support our police officers, yet we must also hold them accountable for the use of their authority.

When we see a case of injustice, we should be so bold as to be a whistle blower, making sure the accountability structure is aware of the situation, whether this means making a call to Children and Youth Services, reporting spousal abuse to the police, or reporting an unfair treatment of employees. However, the manner in which such reporting and protesting is done also requires accountability by citizens. Protesting a perceived injustice does not give an individual himself or herself permission to engage in additional injustice. Protesting injustice does not justify looting and damaging the property of others and the community.

We need to engage in serious and difficult dialogue about the continuing struggles and issues in our society, as we seek to balance authority and accountability. Violent protesting, however, does not facilitate such discussion. Instead, we must all act in ways that respect those around us, and we must hold each other accountable, police and citizens, for our behavior.