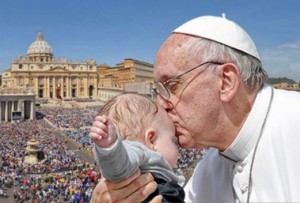 In a meeting with Catholic gynaecologists this morning Pope Francis strongly condemned abortion as a manifestation of a “throwaway culture.”

“Every unborn child, though unjustly condemned to be aborted, has the face of the Lord, who even before his birth, and then as soon as he was born, experienced the rejection of the world,” the pope said.

The comments come one day after the release of an in-depth interview in which the Pope had explained that despite criticism he has avoided speaking about moral issues like abortion and gay “marriage” in his papacy, instead focusing on preaching about the love of Christ.

“We cannot insist only on issues related to abortion, gay marriage and the use of contraceptive methods,” Pope Francis had said in remarks that were widely interpreted as a call for Church leaders to downplay the Church’s moral teachings on controversial issues.

In response to that interview the United State’s largest abortion advocacy organization, NARAL Pro-Choice America, even posted an image thanking the pope for his comments on their Facebook and Twiter pages. But NARAL’s celebrations were cut short by today’s blunt remarks by the Pope, in which he urged doctors to respect life “from the first instant of conception.”

Speaking to the International Federation of Catholic Medical Associations, Pope Francis spoke of a paradox in medicine today. “On the one hand we see progress in the field of medicine, thanks to the work of scientists who passionately and unreservedly dedicate themselves to the search for new cures,” he said. “On the other hand, however, we also encounter the risk that doctors lose sight of their identity in the service of life.”

“While new rights are attributed to or indeed almost presumed by the individual, life is not always protected as the primary value and the primordial right of every human being,” said the Pope. “The ultimate aim of medicine remains the defence and promotion of life.”

The pope told the doctors, “Your being Catholic entails greater responsibility: first of all to yourself, in the effort to be consistent with the Christian vocation, and then to contemporary culture, to help recognize the transcendent dimension in human life, the imprint of the creative work of God, from the very first moment of conception. This is a commitment to the new evangelization that often requires going against the tide, paying a personal price. The Lord counts on you to spread the ‘Gospel of life.'”

As he has in the past, Francis condemned a “throwaway culture” that would eliminate the weak and vulnerable in society. “Our response to this mentality is a ‘yes’ to life, decisive and without hesitation. ‘The first right of the human person is his life. He has other goods and some are precious, but this one is fundamental – the condition for all the others’”.

Concluding, the Pope said, “bear witness to and disseminate this ‘culture of life’ … remind all, through actions and words, that in all its phases and at any age, life is always sacred and always of quality. And not as a matter of faith, but of reason and science! There is no human life more sacred than another, just as there exists no human life qualitatively more meaningful than another”.