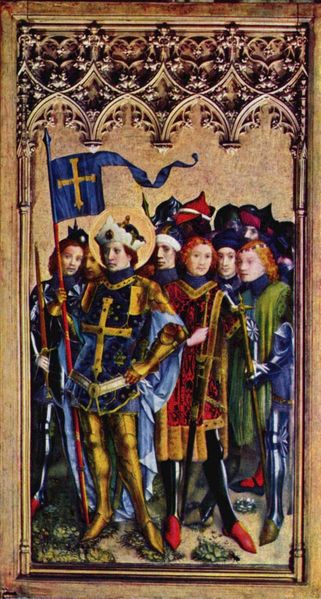 The Theban legion numbered more than six thousand men. They marched from the East into Gaul, and proved their loyalty at once to their Emperor and to their God. They were encamped near the Lake of Geneva, under the Emperor Maximian, when they got orders to turn their swords against the Christian population, and refused to obey.

In his fury Maximian ordered them to be decimated. The order was executed once and again, but they endured this without a murmur or an effort to defend themselves. St. Maurice, the chief captain in this legion of martyrs, encouraged the rest to persevere and follow their comrades to heaven:

“Know, O Emperor,” he said, “that we are your soldiers, but we are servants also of the true God. In all things lawful we will most readily obey, but we cannot stain our hands in this innocent blood. We, have seen our comrades slain, and we rejoice at their honor. We have arms, but we resist not, for we had rather die without shame than live by sin.”

As the massacre began, these generous soldiers flung down their arms, offered their necks to the sword, and suffered themselves to be butchered in silence.

Reflection.—Thank God for every slight and injury you have to bear. An injury borne in meekness and silence is a true victory. It is the proof that we are good soldiers of Jesus Christ, disciples of that heavenly wisdom which is first pure, then peaceable.