Trending Now
You are at:Home»Columnists»Pope Francis on Gays
By Russell Shaw on August 9, 2013 Columnists, Featured 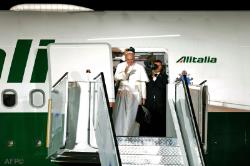 Two days after Pope Francis’ now famous remarks on homosexuals and homosexuality, I heard a homily in which the homilist said Francis was giving us light “to see things in a way we never saw them before.”

That certainly is true. What the homilist didn’t say is that in the present instance the Pope also was taking a risk–a calculated one, no doubt. It’s the danger of being misinterpreted and misrepresented, whether accidentally or by design.

Plainly the Holy Father sees significant pastoral benefits in reaching out to gays. These include the possibility of reconciling some of them with the Church and fostering a more charitable, welcoming attitude toward them among Catholics at large. These are real goods.

But the potential harm involved here is no fantasy. It lies in the risk of creating the perception–or allowing it to be created–that the Pope is opening the door a crack to approval of the gay “lifestyle,” including homosexual acts and same-sex marriage. Some early reactions among gay rights activists to what Francis said seemed to justify this concern.

Francis is undoubtedly aware of these things. Even so, he apparently believes that, on the whole, the potential benefits outweigh the potential harms. This is a papal judgment call that the rest of the Church should respect.

Seen in context, what he said about homosexuality in the course of a freewheeling July 28 news conference on the plane carrying him back to Rome from World Youth Day in Brazil was not so obscure.

Speaking of priests–and by extension, it seems safe to suppose, of non-clerics as well–he found no fault with someone who has a homosexual orientation but “seeks the Lord and has good will.” This, one might add, is hardly something new for a Church leader to say.

Instead, Pope Francis noted, the problem is with a “gay lobby” operating behind the scenes–supposing such a thing to exist–and with those who act out homosexual orientation by engaging in homosexual acts. He made the latter point implicitly but clearly by citing what the Catechism of the Catholic Church says on the subject.

All the same, it appeared at first that he’d made a serious verbal slip by repeating the familiar mantra, “Who am I to judge?”

Casual observation and serious studies concur that the moral relativism expressed in “Who am I to judge?” is dominant in today’s America. Non-judgmentalism is the eleventh commandment for many Americans, according to sociologist Alan Wolfe. Considered in this light, the Pope’s unscripted remark seemed unhelpful.

But did he say it? Look again at his words: “If a person is gay and seeks the Lord and has good will, who am I to judge that person?” (In the original Italian: Se una persona e gay e cerca il Signore e ha buona volonta, ma chi sono io per giudicarla?) Reports that omitted the  first part failed to capture Francis’ meaning. This is the difference between what would otherwise be a shrug of the shoulders (“Who am I to judge?”) and a necessary norm of faith (“Seeks the Lord and has good will”).

If there’s a lesson, it’s a familiar one. Don’t believe everything you read and hear about this Pope. The Holy Father’s off-the-cuff populism is hugely appealing to millions. But it lays him and the rest of us open to hasty reporting that ignores nuances and complexities in favor of headline-grabbing simplifications, while at the same time making it easy for special interests to exploit the results.