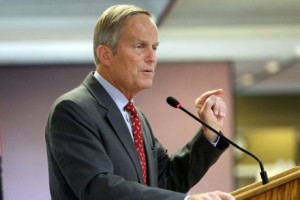 In the last couple of days, though it remains in the high 90s around here, the hysterical shrieking of feminists around the internet has woken me out of my usual late Italian-summer torpor. Congressman Todd Akin, who is running for the Senate in Missouri, said that in cases of “legitimate rape” the chances of becoming pregnant are slim, and made the apparently outrageous suggestion that in cases of pregnancy due to rape it might be better to punish the rapist, not his innocent child. And the ladies who like abortion are having a rather predictable and unconvincing attack of the vapours over it.

If we can make ourselves heard over the shrieks of stage-outrage, I think we should actually be thanking Mr. Akin for presenting us with this golden teaching moment. The entire edifice of lies that is the “rape exception” needs to be shredded, and as publicly as possible.

Mr. Akin, widely regarded as a “pro-life” politician, referred to it as a “particularly tough sort of ethical question,” and a great many pro-life people seem to agree. This is a problem because the rape argument is actually about as sturdy as a soap bubble, and way more fun to pop.

The fact is, the abortion movement has invented the rape exception as a useful propaganda tool, a club with which to bludgeon pro-lifers into silence. They have succeeded in this because they know that a lot of pro-lifers will crumple at the first sign of shouting. It might not be a popular thing to say out loud, but in my travels I’ve met a significant number of “pro-lifers” whose primary concern is to find ways to demonstrate how “pro-woman” they are and are only too eager to rush to agree with the abortionists, or at least provide excuses for them, on the rape exception.

The fact that the feminist crocodile tears over rape-induced pregnancy have succeeded in driving a wedge into the pro-life movement is a sign that pro-lifers, particularly our politicians, are in desperate need of both a sturdy plank for their backs and some solid training in apologetics. We are already seeing pro-lifers in blog posts, comment boxes and on private lists fighting to get on the bandwagon, saying, “What a despicable thing to say!” and it’s only a tiny step from there to a friendly, placating, “There, there. We’re the nice pro-lifers. Of course we support a rape exception…”

I have coined the term “Pro-lifer Stockholm Syndrome” to describe a mental state in which a pro-lifer has become so concerned with being liked, or at least not hated, that she has actually gone over to the other side. In the old days, spiritual writers used to call this the error of “human respect.”

We might be able to concede that Akin spoke poorly, but it is imperative that we never abandon a single inch of the field to the pro-abortion side, yes, even when they’re screaming at us. It should be a rule that when a pro-lifer makes a mess of things, first, we don’t abandon him; second, we take control of the narrative and start demanding that they back up their claims with facts. Always call them on their assertions. Always.

The rape exception is nothing more than an emotional red herring and we pro-lifers have played along. At the very least, we don’t talk about it. But it is probably the easiest of all the abortion slogans to refute. Something to remember about abortion-supporters is that they are 1) liars, and 2) bullies; they’re counting on us panicking. But this is a perfect opportunity to come out swinging.

So, I’d like to offer here a free ten-minute, back-stiffening lesson in pro-life apologetics. The first lesson is about appeasement and comes from Winston Churchill: “An appeaser is one who feeds a crocodile, hoping it will eat him last”. Not only is it damaging to the cause to try to appease the other side, it is unnecessary. We can even leave completely alone for now the question of the reality of the unborn child and the strange fact that suddenly these people are advocating the death penalty for the totally innocent child of a rapist.

If we are focusing strictly on the needs of women, ask first, “How does abortion make a woman un-raped? Does it change anything at all about the experience or the trauma?” Abortion pushers like to say these days that abortion is a “difficult” or “traumatic” choice that a woman never takes lightly. OK, then why are they suggesting that she should undergo another traumatic experience to cure the last one? Exactly how is this helping?

Next, let’s talk about how dedicated the abortion movement is to women’s wellbeing after rape. What have we seen happens when an underage girl goes to Planned Parenthood after a statutory rape? She’s scared, she’s humiliated, she’s alone and full of hurt and shame and anger and fear. What does Planned Parenthood do? Do they call the police? Is there concern about her psychological trauma? The videos we’ve seen show that the only concern is about whether the pimp’s credit card clears.

I’m not even going to bother refuting the trumped-up pretense that we don’t know what he meant by “legitimate rape”. He meant violent assault by a stranger, as opposed to date rape or statutory rape, which, yes, are different. But on this question, you might just ask why Mr. Akin’s remarks about “legitimate rape” were so horrific but Whoopi Goldberg’s nearly identical comments that Roman Polanski wasn’t guilty of “rape rape” were not. It couldn’t be, could it, that its because Akin’s a pro-life Republican and she’s a card-carrying liberal feminist Democrat? Nope, no double standard under here.

Then we can address the scientific questions. Akin’s comments are being shouted down as ludicrous or unsupported by science and the media are busily trotting out legions of obstetricians to denounce him as a heretic. But what exactly are the effects of extreme stress on a woman’s ability to conceive?

Before Mr. Akin’s comments suddenly made it politically incorrect to talk about it, there was a body of research asking the question, some of which found lower rates of pregnancy among rape victims. And yet we’re being asked to believe that the stress and trauma of being forcibly violated by a stranger has no impact whatsoever on fertility, that there is, essentially, no physical or hormonal difference between violent rape and a loving encounter between spouses.

How can we know whom to believe when the same medical and scientific community roundly denouncing Akin today says with a straight face every day that pregnancy starts at implantation and not fertilization, that a child before birth cannot feel pain or is “just a blob of cells”. No, instead of asking for evidence like peer-review articles, the MSM is allowing them to just continue shouting. This, of course, is how seizing the narrative works: tell the big lie and never give the opposition any credit for anything whatsoever.

A look at the statement on the controversy from the American College of Obstetricians and Gynecologists will illustrate what I mean. “Each year in the US, 10,000 –15,000 abortions occur among women whose pregnancies are a result of reported rape or incest. An unknown number of pregnancies resulting from rape are carried to term.”

Neither of these statements actually addresses the question. ACOG is not telling us how many pregnancies are the result of rape, only how many are aborted and we are not asking how many are carried to term. And they don’t mention the fact that they have no idea how many abortions there are in the US, for rape or otherwise. A statement from their ethics committee dated January 2009, said, “Obtaining accurate statistics about abortion prevalence is difficult given underreporting of abortion and lack of a national requirement for reporting abortion.”

Despite not apparently knowing the answer, or even understanding the question, however, they don’t hesitate to dive in and make the claim that “there is absolutely no veracity” to Akin’s belief about pregnancy and rape.

Then we are told, “A woman who is raped has no control over ovulation, fertilization, or implantation of a fertilized egg (ie, pregnancy). To suggest otherwise contradicts basic biological truths.”

Indeed, if anyone were saying that a woman who is raped has the conscious ability to stop her ovaries from generating gametes or to stop a sperm from penetrating one, that would be absurd. But of course, anyone who is not blinded by a political imperative knows that neither Akin nor the pro-life movement is saying anything like this.

This statement is what we called the “straw man”; ACOG is setting up something obviously ridiculous and saying, “See? What an idiot! I’ll bet he thinks God created the universe.” Yeah, ACOG: the group that has tried to dupe the public into believing that “emergency contraception” never, ever causes an early-term abortion, despite what it says on the package.

Why should I believe these people when they refuse to address the scientific data on the negative psychological after effects of abortion? The links to cancer? Maternal mortality? Depression? Substance abuse? Suicide? They keep saying we don’t have scientific evidence but it is amply demonstrated that they refuse to cooperate with science for political reasons.

Take away the hysterical politics and the question becomes quite ordinary. There is ample evidence showing that stress negatively impacts general fertility. What does the sudden horror of violent rape do to it? When a woman is violently raped does her body’s chemistry react differently?

We are expected to jump like rabbits every time someone shrieks about pregnancy due to rape. But they only do this because they know it works. I can understand it, who likes to be shouted at and called nasty names? But it is imperative that we learn that this is nothing more than a political slogan, a rather dirty trick.

As our friend the pro-life apologetics trainer Scott Klusendorf likes to say, “So OK, if I change my position to support legalised abortion in the 0.0001 per cent of cases of pregnancy due to rape and incest, will you then drop your insistence on restriction-free abortion on demand?