Trending Now
You are at:Home»Learn & Live the Faith»Catechesis»Purgatory Part 1: Conversion as a Process
By JC Sanders on February 20, 2013 Catechesis, Featured

Question: What is purgatory, and why is it necessary?

Purgatory is the state, place, or process by which a soul is purified for entrance into heaven. 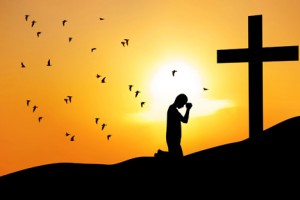 Conversion as a Process

When we are converted to Christ and baptized, we are given grace which allows us to recognize our sins, and which begins to cleanse us of these sins. However, because we continue to sin after conversion (1 John 1:8-9, Romans 3:23), after baptism, and indeed even after repentance of past sins, despite our best intentions and despite our sincere resolutions to avoid sinning, we must be involved in a process of being cleanse and sanctified. We can fall out of the state of grace (1 Corinthians 15:1-2, 2 Timothy 2:12, Hebrews 10:23-27, CCC 1855-1856), so it also stands to reason that we can live in an intermediate state: in grace but not yet sanctified. I would venture to say that many of us spend most of our (post-conversion) lives in this state—works in progress, as it were.

We may still be in this work-in-progress state when we die. We are essentially still converted to Christ, but not yet fully sanctified, still being tempted into sin, still occasionally turning away from God, even if we always turn back to Him [1]. We know that in this life, it is a struggle to overcome past sins, and that there are always new ones to which we might be tempted. We know that some things which once tempted us don’t tempt us any longer, but that there are other things which now tempt us more strongly, new temptations to sin which must be overcome.

In his letter to the Romans, St Paul tells us that

Some commentators have interpreted this passage to mean that what we do does not matter, only whether or not we have faith in Christ. “The Law” stands in for “good works,” which are equated with “works of the flesh.” I do not think that this is a proper—or at least a complete—interpretation of this passage. Rather, the law still remains (Matthew 5:18), and we are still bound by it. What is this freedom from the law, then, if we are still bound to the law? We might be bound in more than one way: bound to obey, bound by penalties of; or it might be that we are bound as under the burden of.

I think that the correct understanding of St. Paul is that his freedom of the law is to find the law less burdensome. “Thou shalt not murder” is a part of the law, and we are bound by this commandment, and not merely because our society believes that murder (or at least some types of murder) is wrong and punishable by civil law. Rather, we are bound by this commandment because murder is intrinsically evil, and always involves a turning away from God (and, for that matter, from man). But the commandment “though shalt not murder” is not burdensome to us. I am not, and I believe that you are not, tempted to murder anybody. So in that sense, we are “free” of the law to not commit murder.

So what does that have to do with purgatory? Well, we are not yet free of the whole law, in that we are tempted still to transgress other parts of it. Many of us are not even actually free of the commandment to not murder, since our society permits, condones, and even to some extent encourages murder in the form of abortion. Others are tempted to others sins: adultery or fornication, theft, calumny, blasphemy or idolatry (which includes attempting to remake God into our own image), covetousness or greed… I will not attempt to produce an exhaustive list. Most of us are free of temptations to many of these sins, some are free of temptations to most of these sins, and a small handful are nearly free of any temptation to the sins which I could name (there are always more sins).

Suppose that we die in this intermediate state: essentially in friendship with Christ, but still fighting off temptations (let alone committing actual sins). What then happens to us? First of all, a temptation is not a sin, but rather the enticement to sin. It could be ignored, resisted. On the other hand, we generally find in this life that such resistance can be difficult, and may even involve some small amount of sacrifice on our own part: perhaps even some suffering. Yet, when we ask God for the strength to resist sins, and when we make the effort to cooperate with what grace He does send us, we eventually find that the temptations are lessened somewhat, and that we actually can resist them successfully. Yet this often involves some effort and sacrifice on our own part here in this life. What if we fail to make that effort, if we cave in to temptations, what then?

There are some who would say that we don’t actually have faith in Christ. Perhaps this is so—but what is faith, then? It would therefore necessitate more than just belief and trust, more than acknowledging Him as Lord and Savior. I agree that there is more to faith than this, but then we enter the question as to what faith is, and what it needs to be to be a channel for grace. Ultimately, for such a view of faith to be consistent, anyone who sins—or at least, who sins grievously—lacks faith in Christ, and this whether they repent or no.

On the other hand, there are some who might say that the struggle to repent and sin no more does not matter. Once Christ is accepted into the heart, then the person is saved for all time, regardless of the sins he commits, and regardless of whether he is contrite after having committed those sins. Upon death, those sins are immediately forgotten, and bear no penalty. We might still try to resist temptation to show our love for Christ, but it ultimately does not matter one whit as to whether we sin or not. Since no unclean thing enters into heaven (Revelation 21:27, upon death, we shed all of our sins and temptations, even as our soul sheds its body (nevermind the resurrection on the last day); or, alternatively, we are declared clean and our sins are declared as null upon death, and we enter straightaway into heaven. This, however, begs a question: what is a sin anyway? If they can be declared null, what is the point of not sinning? And why should some souls go to hell for sinning, if sins can be easily nullified or cleansed?

In his Catholicism and Fundamentalism, Karl Keating summarizes the difference between this approach—which he calls the Fundamentalist’s approach—and the Catholic approach to sin, sanctification, and salvation. He writes that

“The main reason for opposition to purgatory is that it cannot coexist with fundamentalism’s notion of salvation. For fundamentalists, salvation comes by “accepting Christ as one’s personal Savior.” Aside from that one act of acceptance, no acts—meaning no good deed and no sins—make any difference with respect to one’s salvation. If one is “born again” in fundamentalism’s sense, salvation has already occurred, and nothing can keep one from heaven. If not “born again,” one is damned. In fundamentalism’s scheme of things, purgatory would be superfluous, since cleansing before entering heaven would be unnecessary, on the notion that every soul is unclean and God ignores the uncleanliness by “covering” the soul’s sinfulness.

Purgatory makes sense only if there is a requirement that a soul not just be declared clean, but actually be clean. After all, if a guilty soul is merely “covered,” if its sinful state still exists but is officially ignored, then, for all the protestations that may be given, it is still a guilty soul. It is still unclean. A man who has not bathed in a month is not cleansed by merely putting on clean clothes; clean clothes will not remove the dirt. Likewise, “covering a soul” will not purify it; its dirty state is merely hidden from view. Catholic theology takes it literally that “nothing unclean shall enter heaven.” From this it is inferred that a dirty soul, even if “covered,” remains a dirty soul and is not fit for heaven. It needs to be cleansed or purged of its dirtiness. The purging comes in purgatory.”

—Footnotes—
[1] It’s worth noting here the difference between perfect and imperfect contrition. The souls in purgatory are sorry for their sins, but is this a sorrow for having offended God, or is it a sorrow which fears the loss of salvation or the punishments of hell?