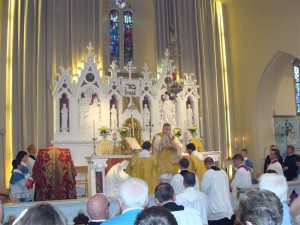 Over the past two weeks, the “reform of the reform” has found its way in the news, and in a lot of discussion within the Catholic commentariat.  It all started when Fr. Thomas Kocik, one of the leading lights of the reform of the reform, wrote an article stating that the current reform movement was an attempt at “reforming the irreformable.”

For Fr. Kocik, if you want a mass that is most in line with the Second Vatican Council, it is the Extraordinary Form. This quickly caused a lot of debate within Catholic circles, one such response being by Bishop Peter J. Elliot. Why should this matter to non-liturgical buffs?  Terry Nelson asks this question, and isn’t a real fan of this discussion. (If you aren’t reading Terry, do so.)

I tend to look at things from a different direction, and find all of this pretty exciting, and I think it has ramifications far beyond liturgical buffs.  Before we can talk about that, we need to get a few things clear, or at least I think they should be clear already.

The reform of the reform isn’t “dead” for the Ordinary Form. While liturgies are timeless, they develop organically so long as they exist.  Since the Ordinary Form isn’t going anywhere, you will continue to see people devote energy to reform.  Catholics wants to get the most out of whatever Mass they attend, and we should encourage them to do so.  If we write off any reform, we are telling the majority of the West’s Catholics to embrace the stink.

I don’t see anyone calling for that, nor should they. If anyone is calling for that, remind them that the implementation of the liturgical reforms in 1969 in a haphazard way caused a lot of devastation to the faithful. (I think, this being 2014, we can stop debating over whether or not the initial implementation of the reform was a success or not, everyone agrees it wasn’t.)

What is happening isn’t the death of the reform of the reform, but rather its development. Call it Reform of the Reform 2.0. We have Benedict XVI (one of the initial leaders of the ROTR) to thank for this.

In Summorum Pontificum, he restored to every priest the choice to say the now Extraordinary Form of the Mass.  He gave every faithful Catholic in the West a choice between two lawfully approved celebrations.  As a result, people will inevitably start comparing and contrasting the two forms, and decide which one gives them a better chance to worship God with the full and active participation the Second Vatican Council calls for.  All of this was a seen consequence of the motu proprio.

What was less talked about is this choice also applies to reformers. The same things we talked about before about why the OF must remain are also reasons why liturgical reformers might choose the EF. They see within the Extraordinary Form a true vessel for liturgical reform, a reform that centers mostly around changing our approach to how we worship, rather than what rubrics we can change on a whim.

In short, they are applying Sacrosanctum Concillum to the Extraordinary Form, and they are finding (sometimes to their surprise) that a lot of what Vatican II calls for has already been implemented in most traditionalist communities.

The days of most masses being low masses are either gone or fading in the areas they still exist. Very seldom do you get a priest saying mass in 10 minutes by mumbling through the Latin, or doing the consecration so fast you risk missing it if you blinked. They find that people are a lot more receptive to traditional forms of music than originally thought. They see a lot of possibilities for making the Biblical connections of the Mass more apparent in the EF through better instruction.  Sometimes there could even be a chance for some organic development to the 1962 Missal, but we are getting a little ahead of ourselves.

Now that faithful Catholics and faithful reformers have a choice, I think you will start seeing many more choose the Extraordinary Form.  The reform of the OF will continue, but there is going to be an initial “brain drain”, as a lot of the interesting liturgical scholarship starts happening within the EF communities.

If the reform is going to succeed, new minds will come in those ranks and continue the reform. Yet for some to complain that others are using the choices Rome gave them to make decisions they don’t agree with is like complaining about winter: it exists, and will continue to exist no matter how often you rail against it. Better to adapt accordingly.

If I’m right (and most people read me because I try to speak sensibly), we will get even more ways to make the liturgy central to our faith lives, and traditionalists can only smile when they think of the kind of liturgical genius future Fr. Kocik’s will apply when working almost or entirely with the Extraordinary Form.

It is a good time to be a liturgy lover, and I say let the good times continue.