Trending Now
You are at:Home»Featured»Remembering the Significance of D-Day
By Dr. Marvin Folkertsma on June 5, 2012 Featured, Government & Politics 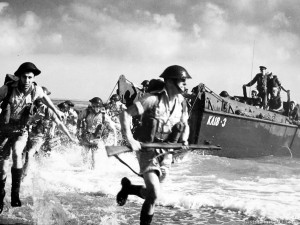 At 0227 hours on the morning of June 6, 1944, Lieutenant Robert Mathias saw the red light flash above the door of his C47 “Dakota” aircraft, signaling his men to get ready to parachute into a terrifying blackness that was streaked with machine-gun tracers and punctuated by exploding rounds from four-barrel 20-millimeter Flakvierling-38 anti-aircraft guns. The Cotentin Peninsula loomed beneath him as he stared into an abyss crackling with enemy fire and crawling with Nazi troops. Machine-gun rounds peppered their slow-moving, easily targetable transport, “sounding like rocks being shaken in a tin can,” Stephen Ambrose reports. Then, just as he was ready to jump, a shell exploded nearby, shredding his reserve chute, propelling red-hot flak into his chest, and slamming his body to the floor. The light flashed green. He got up. He didn’t have to. He could’ve crawled away, let his men jump without him, returned to England, get treated. But he got up anyway, struggled to the open door, yelled, “Follow me!” and leaped into the hellish maw of combat below, and to his death. And into the history books as well.

For they all knew they were making history, from the lowliest privates slugging it out with their M1 Garands, or BARs, or flamethrowers, to those at the peak of the Allied and German command structures. Everyone knew the stakes involved, especially Hitler, for whom the defeat of the invasion of France constituted “the sole decisive factor in the whole conduct of the war and hence in its final result.”

It is not hard to see why. The war had not been going well for the Third Reich, especially on the Russian front since the defeats at Stalingrad and Kursk in 1943, where the Russians had succeeded in demolishing entire armies in the German order of battle. Still, the situation for Germany was not hopeless; far from it. Indeed, the Germans had conquered so much territory that they could afford to exchange it for time to recoup their losses, strike back at the Soviets, stabilize the line in the east, and perhaps arrange for a separate peace, which is approximately what happened in World War I. Best of all, the grotesque alliance arrayed against Germany could not be expected to hold together. Or so he reasoned.

Interestingly, Hitler’s thinking was mirrored at least in part by those in charge of Western strategy. Without question, a failed invasion of France would constitute a calamity of incalculable proportions for the Western allies. It would takes months—perhaps an additional year—to reorganize and mount a similar endeavor, giving the Germans additional time to prepare. Perhaps worst of all would be the damage to troop morale, along with the corrosive effects on American and British public opinion. The British had little stomach for more years of war, and Americans were habitually impatient, a mordant combination that might have concluded military operations with an armistice instead of a surrender, and before the availability of atomic weapons.

Further, the record of previous amphibious landings was not particularly instructive, though they had been successful—three in Sicily and Italy—but these had been against unfortified coastlines. The attack made by the Canadians in 1942 at Dieppe, a skeletally fortified port in northern France, was a catastrophe. Yet, if the Americans and British were serious about defeating Hitler, the attempt had to be made and it had to succeed, because the alternatives were unthinkable: a continent dominated by two totalitarian powers, or worse, a Soviet victory over Nazi Germany, which would result in Russian domination of Europe from the Atlantic to the Urals.

Indeed, it is this latter possibility that brings into bold relief the long-term significance of the Allied victory on D-Day, in that the triumph over Nazi Germany in 1944 and 1945 saved Western Europe from being conquered by an equally barbaric Soviet Union. In short, the seeds of the West’s ultimate Cold War victory a half century later were planted on the bloody beaches of Normandy, because in the long run not one but two totalitarian powers collapsed—one in 1945, the other in 1991—as a result of our victory on D-Day. In his simple, direct way, Eisenhower stated it best: “We cannot afford to fail.” He was more prescient than he knew.

A week after D-Day, Ernie Pyle wrote in his column, “Now that it is over it seems to me a pure miracle that we ever took the beach at all.” Rather, make that tens of thousands of miracles, all consisting of heroic young men who formed the backbone of “aroused democracies,” to use the words of Eisenhower again. Men like Lieutenant Robert Mathias, who, by sacrificing his life saved the world—twice, as it were—along with thousands of others who fought and died on D-Day.