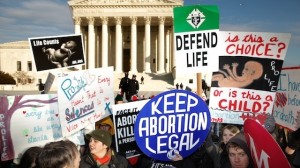 Thirty-nine years ago, the U.S. Supreme Court ruled, in Roe v. Wade, that the laws outlawing abortion in Texas were unconstitutional because a woman had a right to privacy, guaranteed by the Constitution.  Suddenly, the unborn had no legal protection in the United States.  But Roe v. Wade did not just deny legal protection to the unborn, it catapulted the United States toward all manner of unethical biotechnology.

Abortion obviously produces aborted fetuses. The taboo of using aborted fetal tissue for research is not a deterrent for some researchers; such tissue is just another tool in their toolbox. Michael West, formerly of Advanced Cell Technology, freely admits that he has used aborted fetal tissue to advance his research. In his book, The Immortal Cell: One Scientist’s Quest to Solve the Mystery of Human Aging , he wrote, “By scrambling around and persuading, I found a means of getting early human fetal testes and tried to grow the human embryonic germ cell in a dish.”  But, for his research, those germ cells were too old.  In his words, “I needed five week old fetuses.  But where could I get those?  Women do not abort fetuses that early, when they are just learning they are pregnant.”

All of a woman’s eggs come to be during her fetal development. A 20-week-old female has about 7 million eggs, the most she will ever have. Lori Andrews, a reproductive rights lawyer, makes the connection.  She wrote in her book Clone Age: Adventures in the New World of Reproductive Technology, “With over a million abortions a year, some scientists have begun to think the unthinkable—using female fetuses as a source of eggs….”

So I asked, what do you grow these [embryonic]cell lines on now?  On minced up human embryos, he replied.  I cringed.  “Isn’t there an ethical issue in that?”  “You can take it from abortions.  In the human you can use earlier embryos, from the first trimester,” he said.

Companies Like ReNeuron, Neuralstem, Neocutis, and Senomyx are using tissue that came from aborted fetuses to develop drugs, treatments, flavor enhancers, and even beauty products.  Some of the these companies do not publicly disclose where they got their tissue and so well-meaning pro-lifers and now faced with a world where the products they use were made possible by the deliberate killing of an innocent.  A fact that thanks to Roe v Wade, companies feel they do not need to reveal.

In addition to opening the door to the destruction of innocent human life for parts, Roe v. Wade gave legitimacy to something called “reproductive rights.”  Roe v. Wade states that an individual, married or single, has the right “to be free from unwarranted governmental intrusion into matters so fundamentally affecting a person as the decision whether to bear or beget a child.”

These mythical “reproductive rights” found somewhere in the Constitution mean that the United States has an out of control and unregulated fertility industry.  If reproductive rights include terminating a pregnancy, then do they also apply to those who want to get pregnant by any means possible?  There are many who believe so.

Today anything goes because we somehow have a “right” to reproduce.  Many other countries have laws regulating their fertility industries, limiting the number of embryos that can be created and/or transfered into a woman. Thanks to Roe vs. Wade, the United States has wild west human manufacturing that gives rise to Octomom and likely upwards of a million human embryos on ice waiting for a chance to finish their lives. Embryos stem cell researchers cannot wait to rip apart for the stem cell “gold” inside.

“My decision to clone myself should not be the government’s business, or Cardinal O’Connor’s, any more than a woman’s decision to have an abortion is.  Cloning is highly significant.  It’s part of the reproductive rights of every human being.”

Lee M. Silver, Professor of Molecular Biology at Princeton, when discussing the potential outcomes of the marriage of reproductive biology and genetics what he calls reprogenetics. Reprogenetics includes the genetic engineering of offspring according to parental wishes. Silver wrote in his book Remaking Eden: How Genetic Engineering and Cloning Will Transform the American Family:

“Indeed, in a society that values individual freedom above all else, it is hard to find any legitimate basis for restricting the use of reprogenetics.  And there in lies the dilemma.  For each individual, use of the technology can be viewed in the light of personal reproductive choice….” 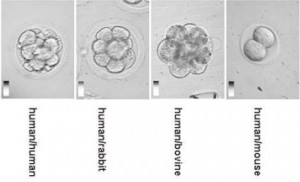 While not illegal in the U.S., reproductive cloning is considered unsafe at present because of the possibilities of genetic abnormalities arising from the cloning process. Abortion would be an essential component of making reproductive cloning a reality.  Gregory Pence, Philosophy professor at the University of Alabama at Birmingham, in his book, Cloning after Dolly: Who’s Still Afraid?, proposes the following solution:

If the primary moral objection to reproductive cloning is that it will likely result in genetic errors in reprogramming, then of course we want research to prevent that kind of problem.  But how do we do that?  The best way is to see how cloned embryos develop and to study them, gestating them in female chimpanzees, artificial wombs, or human volunteers, then aborting them to see which are normal and which are not, then experimenting to see how to create only normally developing embryos/fetuses.

There are technology junkies that want to take these mythical “reproductive rights” even further and call them “somatic rights.” They believe these “somatic rights” give them the power to modify their bodies with any kind of enhancement that they want.

These are transhumanists.  They are not happy to be simply human, they want to be “posthuman” or “superhuman” using technology like genetic engineering, cognitive enhancing drugs, artificial limbs and intelligence to go beyond healing, transforming humanity into something else entirely.  They want to be able to chop off perfectly good limbs and replace them with artificial ones. They want to genetically engineer themselves and their offspring to be superior than the average human. Transhumanism would necessarily create a two-tiered society where those that can afford or have access to enhancements would rule over those that can’t or don’t.

Transhumanists are already using the foundation of “reproductive rights” to build their technological utopia. Kyle Munkittrick, in his piece When Will We Be Transhuman? Seven Conditions for Attaining Transhumanism, argues that for transhumanism to thrive the following must be embraced:

Actions such as abortion, assisted suicide, voluntary amputation, gender reassignment, surrogate pregnancy, body modification, legal unions among adults of any number, and consenting sexual practices would be protected under law….  Transhumanism cannot happen without a legal structure that allows individuals to control their own bodies. When bodily freedom is as protected and sanctified as free speech, transhumanism will be free to develop.

Roe v. Wade did more than just legalize abortion across the Unites States. By denying the human embryo any rights, it has enabled the current practices of embryonic stem cell research and therapeutic cloning. These, in turn, are just stops on the way to reproductive cloning. With legalized killing of human embryos in the womb, we have no moral grounds upon which to object to killing them in a test tube; no way to object to the use of aborted fetal tissue in research and manufacturing.

Without Roe v. Wade would there be no fictitious “reproductive right” that seems to trump all others in our society. “Reproductive rights” have become “somatic rights” that will be used to justify invasive enhancements of healthy men, women and children in the future.

If Roe v. Wade had upheld the sanctity of human life from the moment of conception, the practice of human beings being created and destroyed for their parts would not be possible. Nor would there widespread human manufacturing in the fertility industry. Nor would there be, I believe, so much ammunition to use technology to change the very nature of man into something “posthuman.”

Roe v. Wade has a legacy far beyond abortion. We will feel its reverberations for generations and beyond.