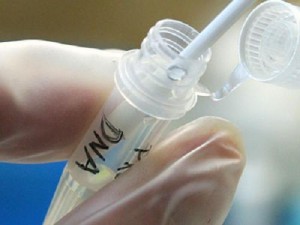 These days it seems we have a “right” to everything except the rights that are actually given to us by our Creator and enumerated in the Constitution. According to this article from the MIT Technology Review we even have a “right to consumer genetics.”

What exactly is consumer genetics? Well, you can go about getting your genes tested in a couple of ways. Your doctor can order a test for a genetic predisposition for a particular disease. You give a blood sample or a sample of cheek cells and a clinical genetics lab tests that for the mutation of interest. (That was my job.) Your doctor, or genetic counselor, gets the results and interprets them for you.

Or you can, without your doc’s involvement, spit in a cup and send your saliva to a for-profit company like 23andMe which will test your DNA for all kinds of things like ancestry (where they tell you what percentage of Neanderthal DNA you have) and health (where they tell you the percentage chance you will get Alzheimer’s or diabetes etc…). And you can enter your spit into research projects for cancer or Parkinson’s disease. With this kind of genetic testing though, you are left to try and interpret the results yourself.

In some states this kind of direct-to-consumer testing is heavily regulated, and in Germany it is banned altogether. Why? It seems harmless enough. Well, it’s because genetics is far more complex than any of us can imagine and experts in genetics worry that results without clear interpretations by health-care professionals may do more harm than good. The average Joe probably doesn’t realize some of the the test results provided by these companies have not undergone the rigorous studies that show causation versus just correlation. Just because you find a mutation in a population of people with Alzheimer’s does not mean that mutation causes the disease. In other words, if A is found in high correlation with B, does A cause B? Or does B cause A? Is there another hidden factor C that is found with B but is the actual cause of A?

A great example of these kind of mistakes in what is called “clinical relevance” was found in the genetic testing for cystic fibrosis. Cystic Fibrosis (CF) is a devastating disease that is caused by mutations in the CFTR gene. To have CF, you must inherent one mutation from your mother and one from your father, which means that both copies of your CFTR gene do not work properly. If you only have one mutation in your CFTR gene you are called a carrier for CF, which means that while one copy of the CFTR gene isn’t up to snuff, you at least have one working copy. The one working copy is enough to prevent you from developing CF symptoms.

But, being a carrier is no picnic because if you were to have a child with a person who was also a carrier, there is a 25% chance that child will have CF. Most CF carriers have no idea that they carry a mutation in their CFTR gene. About 1 in every 30 North American Caucasians is a carrier.

So that brings us to the I148T mutation. When researchers were studying the genetic causes of CF, they discovered that there were a significant amount of people that had CF that also had a mutation in the CFTR gene that causes a substitution of a threonine amino acid for an isoleucine at position 148 of the CFTR protein. Hence the name I148T. Researchers made the assumption that the I148T was one of the two mutations that caused the patients’ CF.

So, anyone who was found to have the I148T mutation, but did not have CF symptoms was labeled a carrier for CF. The I148T mutation was included in the testing panel for many labs, including labs I have worked in.

Unfortunately, that isn’t the end of the story. As more people were tested, researchers found that there were people who had the I148T mutation with another known mutation, but did not have CF. If the I148T mutation was actually was a disease causing mutation, then these people should definitely have symptoms of CF, but they did not.

What researchers eventually found was that I148T was actually what is called a benign polymorphism, which means that it is a mutation that does not cause disease. The disease causing mutation is really a deletion of 6 base pairs at nucleotide number 3199. The mutation is called 3199del6 and just happens to be inherited in high frequency with the I148T mutation.

Long story short: Lots of people were told they were carriers of a CF causing mutation, namely the I148T mutation, when actually, they just carried a benign polymorphism. Time and more information revealed a more complex picture of CF mutations.

I think the same will hold for the results offered by consumer genetics. This is why consumer genetics is something the federal government wants to regulate and why if you take your 23andMe report to your doctor, he or she might just throw it in the recycle bin. From the MIT article:

“I’ve had patients bring me these reports, and I don’t spend a lot of time reviewing the results because this is not a test I would have ordered,” says Sharon Plon, a geneticist and physician-scientist at Baylor College of Medicine in Houston. What’s missing is proof that these tests can inform and improve patient care, she says: “Physicians are going to shy away from using them unless they become part of evidence-based medicine.”

So should we have access to consumer genetics? I think so, but it is certainly a buyer-beware situation. Hand over your DNA and wade through the percentages at your own risk.

But do we have a “right” to spit in a cup, send it to a company to do some pretty technical stuff to it, and get a clinically ambiguous report that includes how much Neanderthal we have in our genes? I don’t think so. In the age of positive rights, advocates for consumer genetics better be careful about calling this kind of genetic testing a “right.” The way things are going, if there is a “right” to know what is contained in your genes, then companies like 23andMe better gear up for the federal government forcing them to give away their services for free.

In my humble opinion, I think there is a much better predictor of your future health than consumer genetics can provide at this point. And it is a lot cheaper, free in fact. It is your family history. Look at what your parents and grandparents and siblings suffered from and chances are you are gonna have some of the same problems. You don’t need some fancy genetic test to know what you need to be doing to improve your health.

If you want to go ahead and do it, knock yourself out. Personally, I would never hand my DNA over to strangers at a for-profit company and say, “Have at it.” I will keep my DNA to myself unless my doc tells me otherwise.