Trending Now
You are at:Home»Featured»1.3 Million Demonstrate Against Same-Sex “Marriage” and Adoption in Paris
By J.C. von Krempach, J.D. on January 16, 2013 Featured, The Homosexual Agenda 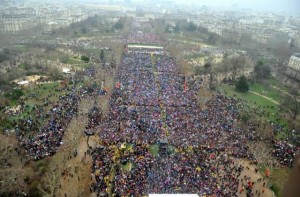 The turnout was overwhelming and dwarfed even the most optimistic forecasts. While official police sources, apparently under pressure from the government, sought to downplay the number of demonstrators who, despite the biting cold, came to Paris last Sunday to rally against the socialist-led government’s plans to legislate for same-sex “marriages” (including a pretended “right” for homosexuals to adopt children or to obtain them through medically assisted procreation techniques), it now turns out that the number of protesters amounted to 1.3 million rather than the official number of 340,000. The Champ de Mars at the feet of the emblematic Eiffel Tower was cracking full, while busloads of demonstrators from all corners of France still kept arriving.

But whatever efforts continue to be made to downplay the event, one thing is clear: opposition against the government’s controversial social agenda can no more be dubbed as “homophobic”, nor can it be pretended that it is voiced only by disgruntled residual reactionaries, or by a small minority of people who are unable or unwilling to adapt to modern times. Also, while the government, referring to some opinion polls of obscure origin and quality, continues to assert that “a majority of Frenchmen supports gay marriage”, those assertions look increasingly ridiculous and out of touch with reality.

The reality is: in France, one of the most secularized countries on this planet’s most secularized continent, opposition against same-sex “marriage” is not limited to religious believers, be they Catholic or Muslim, but it comes from the heart of society, including many atheists and secularists, supporters of President Hollande’s Socialist Party, and even many homosexuals who say that they, having never wanted to marry and adopt children, do not feel represented by the President’s radical social agenda.

The single incident during the demonstration (which, despite its size, took place in perfect peace and serenity) that raised some media criticism was the speech of a homosexual (!) anti-gay-marriage activist who compared President’ Hollande’s autocratic attitude to that of Adolf Hitler. This was manifestly exaggerated and inappropriate, as President Hollande has, at least as far as we know, never shown any intention to send anyone into gas chambers. Nonetheless, it is certainly true that the President’s attitude deserves severe criticism, as it reveals a complete lack of understanding for the legitimate exercise of democratic governance and the intrinsic limitations thereof, and a complete and utter unwillingness and ineptitude to engage in a serious public debate on his pharaonic project.

That a narrow majority won in a parliamentary election in which same-sex “marriage” was not one of the major topics of discussion, does not provide a government with a mandate to alter, or indeed to re-define beyond recognition, institutions like marriage and family, which are far older than the French Republic itself, and more fundamental than any constitutional order. Indeed, this is why a law to introduce same-sex “marriage” or homosexual adoption, even if it were to be adopted following the procedures set out in the Constitution, will never be legitimate: marriage and family are the fundamentals of society, far more fundamental than any constitutional can ever be. These institutions intrinsically belong to, and are required by, the human nature, and therefore cannot be altered just by the whim of an accidental parliamentary majority.

Those who gathered in Paris this past Sunday were not the crowd that usually participates in every and any political demonstration. They were the representatives of the better part of French society: the people who work hard, pay their taxes, sustain their families, educate their children. In short, those who make this society function despite the destructive and self-undermining social policies promoted by many post-1968 governments in France and elsewhere. The true pillars of society, who for once stand up to shrug off the structural parasitism that is vested in agenda’s such as same-sex “marriage”.

During his presidential campaign, President Hollande claimed that he would unify the nation, but his social agenda is polarizing and utterly divisive. He claimed that he was going to listen to the people, but in fact he does all he can to prevent a sincere debate from happening. While he remains completely unsuccessful in bringing about the painstaking reforms of the labor market and the social system that are desperately needed to ensure future prosperity and well-being, he wants to become a great social reformer by destroying the most fundamental institutions of human society. If he has his will, words like “father” and “mother” are to disappear first from the Civil Code, then from common usage, and be replaced by “parent A” and “parent B”, with the state legislator remaining free to define who or what is to be understood by the term “parent”.

The modern French State is built upon the myth of the 1789 revolution, but President Hollande, in reaction to Sunday’s massive demonstration, arrogantly said that “laws are made in parliament, not on the street”. No, Mr. President, the true laws are made neither here nor there, but they are pre-determined by human nature. What we saw this Sunday was a new kind of revolution: without any violence, but infinitely more legitimate. Let us hope that this peaceful revolution will be crowned by success – that it will sweep away those who believe that the mandate that was given to them in parliamentary elections gives them a right to impose on society whatever laws they want, including such that are divisive, destructive, and radically adverse to human nature.