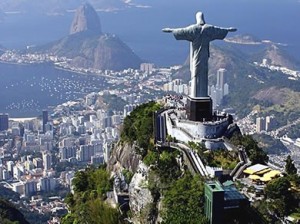 In many respects, what is going on in Rio de Janeiro right now during the UN Conference on Sustainable Development is nothing other than the proverbial “blind leading the blind”. As countries hurry to make politically expedient and alarmist statements about climate change, the green economy and reproductive rights, very few delegations exhibit the poise and coherence that the Holy See usually brings to UN negotiations, and to some effect. No delegation compares to the Holy See when it comes down to the matter of defending the defensless, first and foremost, the innocent victims of so called “choice”: the unborn child, and many other persons who are poor and marginalized.

On Sunday morning the Nunzio to the United Nations, Archbishop Francis Chullikatt, addressed the packed sacristy of the Cathedral of St. Sebastian in downtown Rio de Janeiro during a press conference sponsored by the Archdiocese of Rio de Janeiro, the Brazilian Bishops Conference CNBB and the International Alliance of Catholic Development Agencies (CIDSE). The press conference took place after mass, and was followed by a luncheon sponsored by Caritas.

Needless to say, he was spot on, as usual. He told those present that he was happy to be part of the event, and especially of the Mass, which he said was “more important than a gathering of world leaders”. He added that the Holy See was at the Rio + 20 Conference in order to be the “voice of the voiceless”, as well as to help the international community be a “good steward of creation”.

The Nunzio told those gathered that the Social Doctrine of the Church was rooted in Christ, but was “for all”. He urged that the human person be at the center of development. A “human centered approach to sustainable development,” according to the Holy See, is first and foremost the recognition of the right to life. He said he was disappointed to see how, during negotiations this past week, some delegations insisted on language about “access to sexual and reproductive health and reproductive rights” that undermined “respect for life”, instead of focusing on “health interventions that save lives and access to primary goods.”

He also mentioned the importance of integral human development, which does not lower the dignity of human beings through materialism, and that the Church’s understanding of charity was “different” because it was not a matter of “sentimentality” but “Love in Truth”.

The address of the Nunzio stood in stark contrast to those delivered by other representatives of the brazilian church and catholic NGOs at the same press conference. They conflated climate change and poverty reduction as the same problem, and sounded more like preachers of climate doom rather than disciples of Jesus. A Statment presented by CIDSE, and signed by over fifty catholic organizations, exhibited this same confusion. It is as if these organizations are adopting the language of the green economy in an attempt to be relevant, and are forgetting the doctrine of the Holy Father in Caritas in Veritate about “integral human development”.

Indeed, the voice of the Holy Father shines like a light in the midst of darkness.