Trending Now
You are at:Home»Columnists»Saint Zita in My Kitchen
By Peggy Bowes on April 27, 2011 Columnists, Featured, Women 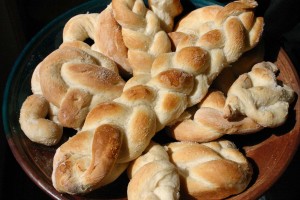 Although many Catholics are devoted to a particular patron saint, I rely on the intercession of quite a few heavenly intercessors.  Naturally the Blessed Mother tops the list, but St. Joseph assists my military family in selling houses and finding new ones, St. Christopher safeguards us on our frequent travels, and St. Anthony helps us find missing items.  St. Francis looks after our pets, St. George watches over my Boy Scout, St. Agnes protects my daughter, and St. Philomena has proven several times that she is indeed “powerful with God.”

The bay window in my kitchen holds a tableau of statues representing our beloved family saints.  I look at them often because I am in my kitchen most of the day.  At times it seems like my life revolves around food!  I must plan menus

, shop for the food, put it away, prepare it, and clean up after it.  I enjoy cooking and preparing healthy meals

for my family, but there are days when I would much rather sit outside with a glass of iced tea

and a good book.  I needed to find a saint who could help me embrace all the little menial chores

required of my vocation as wife and mother.

I came across the perfect intercessor while reading a delightful book about the saints to my children.  It’s called Once Upon a Time Saints by Ethel Marbach Pochocki

, and we were all particularly enthralled by the story of St. Zita.

St. Zita’s life bears many similarities to the tale of Cinderella.  As a young girl in 13th century Italy, she was hired as a servant for a well-to-do family.  Although she was sweet and cheerful and worked hard without a single complaint, her employer and fellow servants despised her.  Undaunted, St. Zita picked up the slack from her lazy fellow workers and was eventually put in charge of all the household affairs.

She awoke early every morning to attend daily Mass and shared her meager food rations with those who were less fortunate than she was.  Her employer suspected that she was also giving away some of the family’s food stores, but he could never prove it as the food miraculously restored itself to its previous state after she gave it away to the poor.

St. Zita was once out on an errand and could not return in time to complete her required duty of daily break baking.  Gleefully, the other servants rushed to tattle on her.  Imagine their surprise when they led the master to the kitchen and found angels busily buttering perfectly-formed loaves of crusty bread.  The family and servants instantly changed their attitude toward St. Zita, yet she continued her humble duties as servant and generous benefactor of the poor, sick, and helpless until her death in 1272.

I haven’t yet found a statue of St. Zita to place in my kitchen collection, but she continues to inspire me.  When I grow weary of my domestic duties, I think of her humility and hard work ethic.  I send up a little prayer, asking for her heavenly intercession as I try to go about my kitchen chores

with a cheerful attitude.

St. Zita is the patron saint of maids, servants, homemakers, single laywomen and lost keys.  Her feast day is celebrated on April 27th, and the traditional way to honor this domestic saint is to bake a loaf of bread.  (Angelic assistance is not guaranteed!)