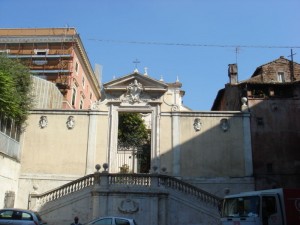 We continue our Lenten pilgrimage through the station churches of Rome with a visit to the church of San Lorenzo in Panisperna. The church is located over the site of Saint Lawrence’s martyrdom, just a few blocks from yesterday’s church, Saint Mary Major. Originally built during the time of Constantine, today’s structure only dates back to 1575.

In 258, during the Valerian persecutions, many Christians were put to death. One such Christian was Pope Sixtus II. A story told by St. Ambrose states that on the way to his execution, the pope passed his deacon, Lawrence. Lawrence questioned the Holy Father as to why he would abandon him during this time. Why would he die for his faith without bringing Lawrence with him. The pope replied saying that Lawrence would join him in death in three days.

Lawrence, who was in charge of the Church’s material possessions, set off to distribute all the riches to the poor. Three days after his encounter with Pope Sixtus II, the prefect of Rome sent for Lawrence and demanded he turn over all the treasures of the Church. Lawrence did as he was told and brought with him the poor, the blind, the crippled and the suffering and said that these were the true treasures of the Church.

He was immediately sent to his death by being burned alive on an iron grill. In keeping with his sense of humor, he told the executioner that he was already roasted on one side and that he needed to be turned over. The oven in which he was martyred is kept in this church.

Saint Bridget of Sweden spent time at this church begging for the poor. When she died she was first buried here before she was moved to Sweden. The church also holds the crucifix which spoke to her and relics from Saints Lawrence, Crispin and Crispinian.

Tomorrow we travel to Santi Apostoli to visit the tombs of two apostles.