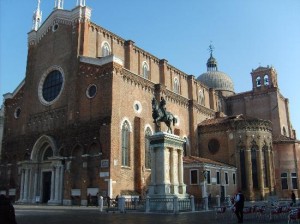 Located a short distance from the Colosseum, Santi Giovanni e Paolo is our stop for today.

Named for the martyrs of the fourth century, this church is dedicated to two wealthy brothers who served in Constantine’s court under his daughter, Constantia. She converted them to Christianity and they would host Christian rites here in their home.
When the emperor Julian came to power, he wanted them to deny their faith and embrace paganism. They refused and were martyed inside their home. They were buried here on the property and their tombs were venerated by friends. The emperor did not like this and had three people decapitated at the tomb, Crispin, Crispianus and Benedicta.

In 398, a wealthy senator, also a friend of Saint Jerome, had a basilica built over the home of these martyrs. This titulus was dedicated the Basilica of Saints John and Paul.

The tomb of the martyrs is located in the church as well as the tomb of Saint Paul of the Cross.

For those fortunate enough to have Eucharistic Prayer I during Mass, you surely have heard mention of these two saints:

In union with the whole Church we honor Mary, the ever-virgin mother of Jesus Christ our Lord and God.

May their merits and prayers gain us your constant help and protection.

Tomorrow we travel to Sant’Agostino.

For more information about this stational Church click here