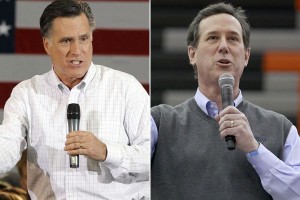 The question for Republicans right now seems obvious: Would you prefer Rick Santorum or Mitt Romney to run against Barack Obama?

Well, it depends on whether you prefer to engage President Obama on cultural grounds or on terms of class warfare. Obama and his chief political strategist, David Axelrod, are going to give us one or the other. Thus, maybe the better question is: Can Santorum articulate and defend social conservatism better than Romney can defend free markets? Which of the two is a more forceful, eloquent spokesperson for the area that Obama and Axelrod will use to define and malign him?

Not only has President Obama been employing class rhetoric unceasingly for three years now, but David Axelrod has been planning precisely such an assault against Mitt Romney. “Obama officials intend to frame Romney as the very picture of greed in the great recession—a sort of political Gordon Gekko,” reported an August 2011 Politico piece titled, “Obama plan: Destroy Romney.” The piece quoted Axelrod: “He [Romney] was very, very good at making a profit for himself and his partners but not nearly as good [at]saving jobs for communities. He is very much the profile of what we’ve seen in the last decade on Wall Street.”

This was the plan even before the Occupy Wall Street movement exploded. Axelrod and Obama view Mitt Romney as red meat for the Occupy movement, the poster-boy for Wall Street greed.

“[Romney] says he represents business,” Axelrod told MSNBC in October, “but he really represents the Wall Street side of business.”

Axelrod told George Stephanopoulos that Romney is “not a job creator” but a “corporate raider” who outsourced “tens of thousands of jobs,” “closed down more than 1,000 plants, stores, and offices,” and joined “his partners” in making “hundreds of millions of dollars” at the expense of the poor. Axelrod calls this the “Bain mentality.”

This caustic, class-warfare rhetoric is just a taste of what will come if Romney gets the GOP nomination. The class envy will get far worse. And no one will do it better than a smiling Obama.

Perhaps the only thing that might energize the president and his team more is a battle with the Catholic Church over his HHS mandate on “contraception.” And that’s where Rick Santorum comes in.

I’m increasingly convinced that President Obama wants this fight with the Catholic Church. I think this is a fight not only close to Obama’s ideological heart, but one he perversely feels can help him politically. If he can frame this debate as not about taxpayer support of abortion drugs, or about religious liberty, or freedom of conscience, or the First Amendment and Constitution—all of which it is—but about “women’s rights” vs. the stodgy old men who run the Catholic Church, he will make headway with certain voters. Don’t underestimate Obama’s ability to do just that.

If Rick Santorum becomes the 2012 GOP nominee, he’ll be an automatic spokesman for the Catholic Church’s position. He’s a living, breathing testimony to the Church’s teaching, from his own personal life to his well-informed intellect on Church teachings. Rick Santorum is the rarest candidate who has actually read Church encyclicals like Humanae Vitae and Evangelium Vitae.

That’s just fine for President Obama and David Axelrod. They’ll take that guy any day. Hey, buddy, you want a culture war based on Catholic Church teachings? You got it!

Never mind, of course, that President Obama started this fight with his heavy-handed decree to the Catholic Church. The president’s protective media will behave as if Rick Santorum is the intrusive one, rudely and righteously thrusting his faith into the “public square.” The media will not portray Santorum as simply reacting to Obama’s totally unnecessary decree and intrusion—which is what really happened—but as a sexist Neanderthal who just can’t pull his nose out of your bedroom.

So, that brings us back to my original question for Republicans: Which of the two—Romney or Santorum—is a more forceful, eloquent spokesperson for the issues that Obama and Axelrod will use to define and malign him? I think the answer is Santorum, which is less a vote for Santorum than a vote of no confidence in Romney’s persuasive abilities. Or does that bring us back to Newt, assuming Newt remains politically viable?

One thing is certain: Neither of these Obama-Axelrod tactics will unify Americans; it will divide them, pitting them against each other by class or religion, by income or faith, by money or conscience. And that isn’t a good thing, especially from a president who promised to be a unifier and symbol of “hope.”

Editor’s note: A longer version of this article first appeared at American Spectator.