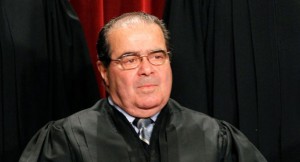 In a scathing dissenting opinion released yesterday, Justice Antonin Scalia lambasted his fellow Supreme Court Justices for striking down a critical part of the Defense of Marriage Act (DOMA) and predicted that it will only be a matter of time before the court finds a Constitutional right to gay “marriage.”

Scalia labeled Wednesday’s decision “jaw-dropping,” calling it “an assertion of judicial supremacy over the people’s Representatives in Congress and the Executive.”

He said that the founding fathers created a judiciary with limited power in order to guard the people’s “right to self-rule against the black-robed supremacy that today’s majority finds so attractive.”

In the majority decision, authored by Justice Kennedy, the Court struck down the provision in the Clinton-era DOMA that prohibited the federal government from providing the benefits of marriage to homosexual couples who had been “married” in a state where gay “marriage” is legal.

Justice Kennedy wrote that DOMA in “invalid” because “no legitimate purpose overcomes the purpose and effect to disparage and injure those whom the State, by its marriage laws, sought to protect in personhood and dignity.”

Justice Scalia slammed the clear implication that the mere act of believing in traditional marriage means someone is driven by a desire to “disparage” or “injure” homosexuals.

“In the majority’s judgment, any resistance to its holding is beyond the pale of reasoned disagreement,” he continued. “To question its high-handed invalidation of a presumptively valid statute is to act (the majority is sure) with the purpose to ‘disparage,’ ‘injure,’ ‘degrade,’ ‘demean,’ and ‘humiliate’ our fellow human beings, our fellow citizens, who are homosexual.”

“All that, simply for supporting an Act that did no more than codify an aspect of marriage that had been unquestioned in our society for most of its existence – indeed, had been unquestioned in virtually all societies for virtually all of human history,” his dissent continued. “It is one thing for a society to elect change; it is another for a court of law to impose change by adjudging those who oppose it hostes humani generis, enemies of the human race.”

Scalia accused the majority of making the issue one of “black and white”: “Hate your neighbor, or come along with us.”

“The truth,” he said, “is more complicated.”

It is hard to admit that one’s political opponents are not monsters, especially in a struggle like this one, and the challenge in the end proves more than today’s Court can handle. Too bad. A reminder that disagreement over something so fundamental as marriage can still be politically legitimate would have been a fit task for what in earlier times was called the judicial temperament. We might have covered ourselves with honor today, by promising all sides of this debate that it was theirs to settle and that we would respect their resolution. We might have let the People decide.

The famously conservative associate justice also ridiculed the majority’s promises that the DOMA decision was not making any statement about the constitutionality of gay “marriage” itself.

“It takes real cheek for today’s majority to assure us, as it is going out the door, that a constitutional requirement to give formal recognition to same-sex marriage is not at issue here,” he said, “when what has preceded that assurance is a lecture on how superior the majority’s moral judgment in favor of same-sex marriage is to the Congress’s hateful moral judgment against it.”

“I promise you this,” he declared. “The only thing that will ‘confine’ the Court’s holding is its sense of what it can get away with.”

Scalia also lambasted the majority for even daring to issue a decision at all, let alone a decision striking down the federal statute.

“We have no power to decide this case,” Scalia wrote. “And even if we did, we have no power under the Constitution to invalidate this democratically adopted legislation. The Court’s errors on both points spring forth from the same diseased root: an exalted conception of the role of this institution in America.”

“The Court is eager — hungry — to tell everyone its view of the legal question at the heart of this case,” he stated.

By weighing in on the hot button issue, said Scalia, the court “has cheated both sides, robbing the winners of an honest victory, and the losers of the peace that comes from a fair defeat. We owed both of them better.”