Trending Now
You are at:Home»Featured»Screwtape on Stage: An Interview with Max McLean
By Marlon De La Torre on March 22, 2013 Featured, MyChurchParish.com, On Media 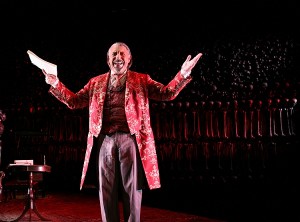 As someone who has long appreciated the catechetical value of CS Lewis’ The Screwtape Letters, it was a great pleasure for me to have the opportunity to interview Max McLean, director of the stage adaptation of The Screwtape Letters and its lead actor, portraying Screwtape. McLean originated the role of Screwtape in New York, Chicago, D.C. and on national tour. The following interview took place on Tuesday February 13, 2013.

Marlon De La Torre: Good morning. Thanking you for taking some time from your busy Schedule to speak with Catholic Lane about C.S. Lewis’ Screwtape Letters and the stage adaptation.

Max McLean: Thank you for having me.

De La Torre: Could you provide us with a brief genesis of how the stage adaptation of  The Screwtape Letters came to fruition?

McLean: Certainly. While working on another stage production — on the book of Genesis — a producer had noticed my work and sent me an e-mail inquiring if I ever thought of bringing C.S. Lewis’ The Screwtape Letters to the stage and [suggesting]that I would make a great Screwtape. The producer saw it more as a meditation instead of a theatrical piece.

De La Torre: I’ve been a life-long fan of C.S. Lewis and his writings, in particular, The Screwtape Letters.  I have also had the pleasure of teaching Screwtape Letters in the classroom to high school students for many years and adapted a book in that correlates it with the Catechism of the Catholic Church.

How would you describe the stage adaptation of Screwtape Letters to the novice reader of C.S. Lewis and its application in daily life?

McLean: When people encounter Screwtape for the first time, they will experience a theatrical, provocative, humorous performance that will inevitably guide them to think spiritually. For some people, Screwtape will seem quite connected to their daily lives, exposing their inner nature, exposing their inner selves. It can also be humiliating [to consider]how easily we can be swayed by the Devil. The important point to all this is that God wants us to be humble.

De La Torre: You bring to light some marvelous points about the overall nature of not only Screwtape but ourselves. In light of this, was it easy or difficult playing Screwtape? C.S. Lewis had responded, when asked a similar question, that writing Screwtape came fairly easy for him.

McLean: Technically, it was difficult playing Screwtape. C.S. Lewis used highly sophisticated language. It was a challenge vocally, intellectually, etc. to truly capture Lewis’ nature behind Screwtape. The story has such a wonderful ending and when you look at the play it is very satirical hence you can distance yourself from the character.

De La Torre: Was it a challenge getting “out of character” so to speak after each performance?

McLean: Because of the satirical approach to the play it made easier to distance [myself]from the character.

De La Torre: How would you describe Screwtape to a secular audience?

McLean: Screwtape is Satan’s chief psychologist on human nature and what makes human nature tick. He gives us a taste of how the Demonic world can be. He exhibits patience in the sense that every man on earth is unaware so to speak of Screwtape and how he can affect our lives.

C.S. Lewis turns everything upside down, where God is viewed as the “enemy” and the “patient” is the prize. Wormwood is the novice in all this. He is not very good at his job. Screwtape needs to hold his hand and help him along as he attempts to sway “the patient” to the “other side.”

De La Torre: Very well put. I found that teaching Screwtape to adults and teens left the students wondering how they have been affected by the temptations of the world. It brought a realization that there is a constant battle going on between good and evil.

How would this story resonate to a younger generation, in particular teenagers and young adults?

One: The safest road to Hell is the gentle, safest road. It’s the little mundane, average things that will get you.

Two: It’s funny how Screwtape strives and thinks the best [most effective]things are done by keeping things out. As Catholic Christians, we were taught about the Spiritual world. Screwtape wants to keep these spiritual things out.

De La Torre: Mr. McLean, it has been a real pleasure speaking with you about The Screwtape Letters. I speak for many of my colleagues who have had the chance to view Screwtape on stage and have come away thoroughly impressed and reinvigorated in their own faith.

Thank you for taking some time from your busy schedule to speak with Catholic Lane and I wish you continued blessings and success.

McLean: Thank you very much. It’s been a pleasure.

Editor’s note: You may view a clip of the stage production and check the touring schedule at www.ScrewtapeonStage.com.